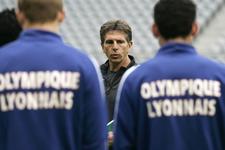 « Ederson is still stuck in bed. He will not be available for Saturday’s match, neither will Källström who has taken a knock to his foot nor Juninho who has pains in his ribs. These three players are all out as are, obviously, Mensah, Govou, Bodmer, Clerc, Réveillère ».

THE MATCH AGAINST CONCARNEAU

« The pitch? I saw some of Guingamp’s last match there. Apparently the pitch has suffered from the weather. I prefer the ground in the state it is now as opposed to the state it was in on the 3rd of january. We have no extra motivation after what happened and was said. It’s a totally different context. The cup is, first and foremost, a celebration. We are focused on this match completely and not the potential game against Marseille. We have to be ready for this match … afterwards we can start thinking about OM. I haven’t decided on the side that will start the match just yet, and I’m not taking into consideration the fact that we could be in action again on Wednesday ».

THE FORM OF THE TEAM

« If you compare it to the match against Lorient, the encounter with Grenoble was a lot more interesting. But, we need confirmation if we want to progress ».

« It’s always a special time of the year, but it hasn’t disturbed us too much. The players we have been linked with? I’m not going to comment on what has been written or said. Fred? He is at the disposition of the CFA squad at the moment. We’ll see what happens next … »
Videos