A number of precisions regarding transfer activity 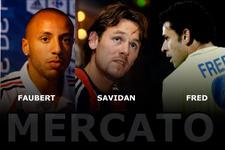 OL bring a number of precisions regarding certain names that have been linked to the club in the morning's Press.
During the winter transfer window, all the sports newspapers have their own prognostics. Who will be coming in? Who will be leaving? And, obviously, Olympique Lyonnais are one of the clubs that our colleagues speak about the most. Mr Marino Faccioli, Administrative Director of Olympique Lyonnais, looks at the names being linked to Lyon in the Press this morning.

As far as Julien Faubert is concerned, he states that the player interests Olympique Lyonnais but for the time being « no decision has been made about him and a lot of other players are in the frame for the post of full-back. Discussions are continuing. » Before closing this dossier, he underlines: « we are still in discussion, we are moving forward but for the moment nothing is set in stone, contrary to what has been written in certain newspapers. » With the injury to Sidney Govou, OL are studying the possibility of bringing in a replacement. Different dossiers are being looked at. Steve Savidan is one player that could be of interest to OL. But we are in the same situation as with Julien Faubert. As we speak, nothing is definitive concerning the two players.

Finally, Mr Marino Faccioli looks at the case of Fred. In the sports paper « le 10 Sport » Bernard Lacombe declared this morning: « Fred is free. » So, what really is the situation concerning OL’s Brazilian forward? It is one of the questions we asked the director: « Fred, who just a few weeks ago expressed his desire to return to Brazil, is still at Lyon » states the director, before continuing « The club has been very understanding with Fred and we have said that if he wishes to return to Brazil to get back in shape then we would allow him to. Right now, we still feel the same, but contrary to what Fred has said to us, things are stagnating. Today, the 20th of January, he is still not decided … ands is still here. »
Facebook
Tweet
Forum