OL stand up to be counted 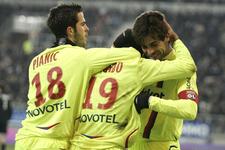 Claude Puel's players won 2-0 at the Stade des Alpes without creating very many chances, but being very realistic. The goals were scored by Ederson (15') and Delgado (75').
Claude Puel started the match with the only four defenders available to him, there were none left on the bench. OL play the match in their yellow shirt, which is normally used in the Champions League. The youngster Alexandre Lacazette who was brought along with the squad, finally watched the match from the stands.

Claude Puel’s men started the match in timid fashion. Juninho was the first to get into action with a curling free-kick which was well saved by Wimbée (7’). From the first real OL attacking movement, Juninho played Karim Benzema down the right and the French international fired in a pass to Ederson in the Grenoble penalty area. The Brazilian managed to win the physical battle with Vitakic and slid the ball past Grégory Wimbée (14’)! Karim Benzema then tried his chance but his left footed effort went at least a metre wide of the post (22’). Grenoble then tried to reply via a free-kick which was deflected by the head of Jérémy Toulalan, flying just past the post of Hugo Lloris (34’). Just a few minutes later, Feghouli saw his free-kick majestically pushed away by Hugo Lloris (40’). A monumental savz from the OL keeper!! OL in turn tried to extend their lead through Ederson, but his half volley went well over the crossbar (43’). Mr. Auriac blew for half time with Lyon a goal to the good.

The second half started without any changes. Toure and Djadjedje quickly put OL under pressure, but Cris was there to tidy things up (50’). Following straight on, Kim Källström tried to fire in an effort but was unable to hit the target (52’), Boumsong then saw his header blocked by Wimbée (56’). Ederson, who picked up a knock to the ankle, had to come off and was replaced by Miralem Pjanic (64’). It was during the period of the match where OL were suffering the most that Kim Källström broke down the left and crossed the ball in towards Chelito Delgado who threw himself at the ball to score with his right boot (75’)!The Argentinean put OL safely in control! At the end of the game the tireless Jérémy Toulalan, played in well by Benzema, it the post of Grégory Wimbée’s goal (88’) !!! Lyon win the match 2 - 0.

The mission was accomplised for an OL side that has finally gotten back to winning ways. The injury to Ederson did, however, put a dampener on the evening. OL’s next match is on Saturday in Guingamp, where they will be up against Concarneau in the last 64 of the Coupe de France.
Videos