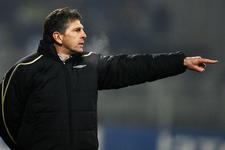 Claude Puel, during his press conference, evidently looked at the injury list that has crippled OL since the start of the season...
THE TREATMENT ROOM

« Mensah has a tear in his quadriceps. He will be out for three weeks. Govou will have his operation on Friday. Réveillère continues working. Bodmer and Clerc as well. Clerc should be back playing at the end of February while Bodmer will be back at the end of the month. Afterwards, to get back to the top level, it could take some time. Faure should be ready this week-end ».

« It’s been a tough season as far as injuries go. We’ve often stood up to be counted in adversity and we’ll continue to do so. Have I ever had so many injuries to my squad as a coach? No. It’s the first time ».

«Since Wednesday we’ve had a change of mind and things are a little urgent now, even if we can find internal solutions, we do have objectives that we need to achieve. The winter transfer window is always difficult, as is the desire to reinforce a squad at this time of the year. Our thoughts are also on the fact that we have few players for certain positions. Time is running out. Bringing in a player to build up the numbers and reinforce the squad would be ideal. We won’t be bringing someone in just for the sake of bringing someone in ».

THE MATCH AGAINST GRENOBLE

« It is very important after our first game back against Lorient. We want to keep our top spot in the League. We really need to kick-off our second half of the season. Against Lorient, the 2nd half was poor, very unsatisfactory. Afterwards, you have to put things into perspective: it was our first game back. Our opponents are right on our heels now, that will keep us on our toes. For the moment, we have been more capable to react that to work in continuity ».

« It’s one of the things we have to work on. OL were more mature in previous seasons. I’m counting on the older players to pass on this culture, even if the number of older players is growing thin. I will repeat myself and say that the League is our priority. Winning in the League is never easy. Winning the League cannot be done to order. We’re going to have a very busy month of January. We need stability, and time to get thngs in order ».
Videos