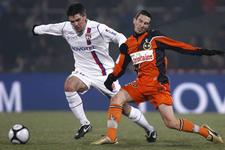 For their first match of 2009, OL were unable to overcome Lorient (1-1). There are regrets, as the match could have been wrapped up in the first half. OL remain in first place with a 2 point lead over Rennes and 4 over Bordeaux who play at home to PSG tomorrow.
It has now been two months since the public at Gerland has seen their side win at home. You have to go back to the 16th of December 2008 to find a trace of the last OL success , against Bordeaux (2-1).
For their first match back, Lyon seemed to lack rythym, due to the two weeks of winter break and the postponement of the Coupe de France match. The good news at the kick-off? The pitch, which was in perfect condition thanks to the tarpaulin that has covered the playing area since the start of the week. At the start of the match, OL had to do without the unavailability of Govou (groin strain) and more importantly the captain Juninho. The first chance of the game came from a set piece. A free-kick from Grosso, slightly to the right of centre, flew just wide (3’). On two occasiosn, Gameiro gave Lorient an advantage, as far as the number of chances were concerned, coming up short against Lloris, who came out well (5’), then firing in a shot that missed the target (6’). Finally, even though he was flagged offside, his run behind the back of Cris proved the capacity of this Lorient side to play without any complex away to one of the top sides in the Ligue 1.
It was, however, Lyon who would open the scoring at the start of this pleasant match. After some good passing between Fred and Benzema, the shot from the French international was pushed away by Audard. But Ederson arriving at full speed managed to fire his effort home (1-0, 10’). A second goal of the season for the Brazilian after the one he scored against from the penalty spot against Le Havre. Just two minutes later, Gerland thought that OL had scored again, but Benzema, quite unbelievably was unable to get his effort on target, in his one on one against Audard (12’). 2-0 at half time, would have been a perfect start to the match.
While Lorient worked on their passing , some great play from Keita confirmed the good relationship between Fred and Benzema during the match. The former flicked the ball on for the latter who saw his shot pushed out by Audard for a corner, with a great save (20’). At the moment Keita had switched to the left flank, Ederson to the right. What happened next? As far as OL were concerned, poor passing, some mix-ups and misunderstanding in the defence, but also in attack, made the rythym of the match drop . Benzema missed another chance pulling his shot wide (40’). This was maybe the turning point of the match. It was a scenario that we knwo all too well now that slowly unraveled at Gerland. OL leading, unable to build on their advantage, and an opponent, Lorient who take advantage of good situations and even strike fear into the home side. From a Vahirua, completely unmarked on the left, cross, Abriel fired past Lloris with a superb back heel (1-1, 43’). Benzema, with a left footed effort, was then denied once again by Audard, who was in great form this evening (44’).

At the start of the second half, the thermometer had dropped below O°. Keita, very much part of the actipon, but quite clumsy this evening, came off replaced by Delgado. Gerland almost saw the first hold-up of the year. Lloris saved his side with two great saves . He pushed away a shot from 20 metres fired in by Gameiro before putting out for a corner in quite spectacular style an effort from Aubertan (49’). The tendencies of the end of the first half,were confirmed at the start of the second: a lot of poor passes, very few solutions and clear cut chances for Lyon. Not very inspired in their play , we would have to wait until the 72nd minute before seeing OL create a slim chance. Benzema fired in a strong cross in front of goal, with Fred firing over. OL’s impotence was often characterised by long balls flung forwards and quickly lost .
In short, the absence of Juninho and his capacity to dictate play, of giving rhythm to a match and firing up the support had certainly something to do with the performance. OL’s play was far from flamboyant against a Lorient side, who confirmed their comfort away from home against the favourites for the title. After their victory away to Marseille (3-2), they took a very good point tonight away to the French champions. Once again OL dropped two points at home and will have to go and win them back on the road. Lyon now have three matches in three weeks, including two derbies (away to Grenoble on the 17th and against Saint-Etienne on the 1st of February. Maybe even four, if OL beat Concarneau in the Coupe de France on the 24th.
The corner into the home stretch of the season has been turned. With objectives set in every competition, we are now expecting a reaction from the Lyon players. A reacion that will allow them to go to the end of their ambitions.
Videos