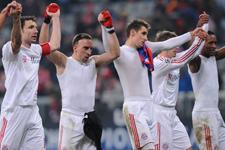 The European train stops tonight at Gerland. A final port of call to decide who, between Lyon and Bayern will finish top of the group and take a first class trip to next February's last 16. Here is a review of the foreign Press.
The Bayern internet site headlines: « Bayern want to put their foot down in Lyon ». The article kicks off with a look at the winter weather that has hit the town recently. « Lyon always seem to welcome Bayern with rain. The weather has modeled itself on Bayerns sad memories of Lyon ». But Karl-Heinz Rummenigge, the Bayern president, is convinced: « We won’t lose 3-0 here again », referring to the « thrashing » they received in March 2001.
The Süddeutschezeitung has compared tonights match to a gala match, speaking of the cahrity Christmas evening that the Bayern players spent, on Monday night, in a Bavarian circus: « The lion tamer Klinsmann wants first place in the group. Ribéry & Co. will throw themselves into the arena, tonight it is all about the Champion’s League but they will be without their magician Zé Roberto and the solid Lucio in defence". The paper goes on to say that the side is « in confident form » at the moment. On the other hand, the journalist does not seem to fancy OL’s chances stating that « things don’t look so good for OL, after 3 matches without a win in the League plus numerous injuries and suspensions, as is the case for Cris, the leader of the defence and Juninho the dead ball expert ». Also speaking in the paper, ther Bavarian general manager, Uli Hoeneß, talks of the similarities between the two clubs: «We’re the last of the Mohicans of this Champions League amongst the elite of Spain, Italy and England ».

The journal Kicker concentrates on the defensive problems of the two sides. For Bayern, « Klinsmann has no choice: with Lucio out, Demichelis and Van Buyten will almost certainly be lined up together. As for OL, the centre of defense looks a little shaky with Mensah not necessarily physically fit ».
The final word was given to the Bayern midfielder, Bastian Schweinsteiger. 7 years ago, after Bayern went completely under at Gerland (0-3 defeat in March 2001), Franz Beckenbauer, on the board at Bayern today, qualified the teams performance as a « football of veterans ». Schweini commented on the absence of the Kaiser at Gerland this evening: « Franz Beckenbauer won’t be there, so we shouldn’t frightened ».

In Italy, the newspapers, logically, focused on the other Group F match between Steaua Bucharest and Fiorentina. The Gazzetta dello Sport hopes that « the end of the adventure in the Champions League will herald the start of a new one in the UEFA Cup » for Fiorentina. Last season the Tuscans reached the semi-final where they were defeated « just one step from the final » by Glasgow Rangers on penalties. The Italian Press also spoke a lot about the return of Mutu to his country of birth. " Fiorentina’s Europe will come from Mutu’s house ", titles the Gazzetta. Mutu is a former Dinamo Bucharest player, the eternal rivals of Steaua, "the is probably the main reason that you can bet the Romanian forward will be booed tonight ".
Facebook
Tweet
Forum