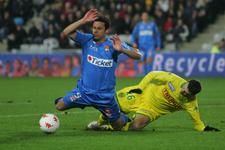 Lyon had the match in hand, taking the lead through Fred Piquionne (42') but the "Canaries", who were rarely dangerous, were gifted an equaliser by the OL defence and a winner by the referee Mr. Ledentu.
Claude Puel put out a completely new line-up for the match at the Beaujoire, using a 4-2-3-1 formation. Fred Piquionne started up front on his own, with support coming from Chelito Delgado, Kader Keita and Kim Källström. The young fullback Thomas Fontaine made his first appearance in the pro squad for an official match.

Just a few minutesbefore kick-off, John Mensah had to drop out and it was Lamine Gassama who took his place at right back. The match had barely begun when Fred Piquionne, coming up a little short in the Nantes penalty area, crashed into Alonzo. Fred Piquionne was very lively in the opening minutes and fired in a magnificent left-footed shot which was saved by the Nantes keeper (5’). Keita was working incredibly hard down the right flank and his duels with Maréval and Capoue were very intense. OL kept Nantes well boxed in and only allowed them chances on rare occasions, apart from two efforts that were ultimately without danger from De Freitas (27’) and Capoue (29’). Chelito Delgado hit a long range free-kick in, which Alonzo was forced to put out for a corner (33’). Only N'Daw forced Lloris into a real save, down near to his left hand post (41’). From a Kim Källström free-kick that was poorly pushed away by Jérôme Alonzo, Fred Piquionne had perfectly followed the ball in and fired home in with the inside of his right boot (42’). OL opened the score, with referee Mr Ledentu whistling for half time three minutes later.

At the start of the second half, Claude Puel’s men still controlled the match and were rarely worried by the Nantes side. Piquionne flicked the ball on to Delgado but the Argentinean was just unable to reach it (52’). Klasnic came on and immediately signalled his presence. Jérémy Toulalan was tackled by Capoue who then made for goal but crashed into Hugo Lloris. Klasnic had followed and placed the ball into the empty net (60’)! The former Werder Bremen player equalised and scored his first goal in the League. Fred came on for Piquionne and was scythed down in the box (65’) but, strangely, it was the OL player who was sanctioned while it was clearly a penalty. Ederson came on in place of Keita and brought his physical impact to the OL attack. The Brazilian played the ball back to Kim Källström but the Swede was unable to hit the target (72’). Even Cris tried his luck, but his effort flew well wide (76’). Fred fired in a left foot effort, but Alonzo dove well to save (83’). Struggling shoulder to shoulder with Lamine Gassama, Bagayoko fell down in the box and this time the referee blew for a penalty (88’)! Scanadalous! Klasnic sent Lloris the wrong way, giving the advantage to his side. Mr Ledentu, far from being faultless this evening, brought the encounter to an end. While they had the game under control, OL brought Nantes back into it by gifting them the equaliser. The referee Mr Ledentu also gave them a helping hand by offering them a, more than generous, penalty two minutes before the end of the match.
Facebook
Tweet
Forum