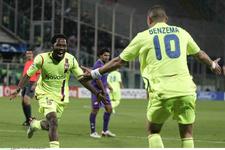 OL have qualified for the last 16 of the Champions League by beating Fiorentina in Florence (2-1). The match against Bayern on the 10th of December will now decide who finishes top of the group.
So, Lyon have grabbed their ticket to the last 16 of the Champions League. One point was enough going into the game against Fiorentina, but they took all 3 in Florence. This is surely the hallmark of a great side. Once again, Benzema, playing cleverly and with great force, and Juninho, ever the visionary, dragged the side forward. After a certain amount of uncertainty concerning the defence, Mensah started at right back and Makoun was preferred to Källström in the midfield.

Kuzmanovic fired off the first effort of the evening (5’) which Lloris turned away with a great save down near to his post. Juninho replied two minutes later with a free-kick into the area which Frey pushed away. While the Italian’s attacked, with an in form Gilardino, and gave OL a few scares, it was in fact Lyon that opened the scoring. After a shot from Keita, and a great effort from the Ivory Coast player to cross the ball, Benzema strangely was given all the time he needed to control and lay the ball off for Makoun, who slid in a side foot effort past the Fiorentina keeper. (0-1, 15’). In the following minute, Lloris saved his side by punching away the ball just as Mutu was lining himself up to finish. Finish off, is something that Benzema was just unable to do after yet another cross from Keita. Juninho then hit the stanchion of Frey’s goal with a rocket of a free-kick (23’). The second goal was not long in coming. Juninho recuperated the ball and passed to Benzema, who faced with two defenders, tried his luck from 20 metres out and scored with a superb right foot effort (0-2, 27’), the goal silenced the Artemio Franchi Stadium, and its team at the same time. But, not for long. Lloris had been able to reassure his team-mates by picking up in imperial form all crosses and corners knocked into his area (30’, 32’).

But some long passes and a number of misunderstandings between the keeper and his defence (31’, 35’) or a Gilardino header that went just wide, reminded everyone that Fiorentina could get back into the game at any moment. Just after Cris almost put the ball past Lloris, a headed effort from Mutu hit the bar (43’). A first warning, as the efforts put in by the side from Florence were rewarded just three minutes before half time, when Gilardino headed home a cross from Santana (1-2, 45’). A frustrating sense of déjà vu entered the collective OL mind. At half time, a match that had seemed to be under OL’s control was once again opened up.

A question of uprights and crossbars

Returning from the dressing rooms, the Italian attacks of the end of the first half continued, and Fiorentina played with great insistence. The match in itself became more and more intense. From a free-kick, Juninho once again hit the crossbar (49’). The match almost turned when a Montolivo shot was just played away by the outstretched foot of Lloris, despite being unsighted when the effort was fired off (50’), then a Mutu shot went just wide (52’). But, at 2-1, everything was still possible for the Viola. A succession of corners, brought on by a Kuzmanovic effort which hit the post and was put out by Cris, cause OL some cold shivers. Frey saved his side from the K.O. following an effort from Keita (70’), Gilardino once again showed of his talent with a great header which just grazed the upright (79’). Barely on the field, Ederson made everyone appreciate the quality of his shooting with a volley which crashed into the crossbar (86’). A final saving tackle from Boumsong ended the contest and left Fiorentina with their regrets from the first match and OL with their ambitions for the upcoming months.

OL qualify for the last 16 for the 6th season in a row. All that remains to be decided is their final position in the group. This will be decided on the 10th of December after the match against Bayern. Juninho and Cris, cautioned this evening, will miss out through suspension and will be able to take a breather. More than a qualification, the match confirmed certain things. Juninho and Benzema are as indispensable as ever. Toulalan is a solid metronome in the midfield. Govou has rarely been as sharp and the defence, globally, kept things tight. But the fact that football is so irrational will keep us away from any sort of euphoria. OL have qualified and are on track as far as their objectives are concerned. Let us not try and predict what will happen over the coming months. Let us just hope that their run can be as exciting as the guard of honour offered to OL by the Fiorentina players and staff at the end of the match.