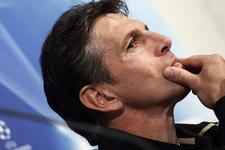 The press conference started at 18h00 with Claude Puel and Fabio Grosso in attendance.
Claude Puel
Is it up to Fiorentina to play for the game tomorrow?
That’s not really how they play. As far as we are concerned, we’re ready for this game. We aren’t going to speculate on tactics.

Are you more serene, given that you only need a point to qualify?
Getting a point is a big thing in itself. Each game in this competition is difficult. We’ve really had to work hard so far. Things will be difficult on Tuesday night. OL have legitimate ambitions in the Champions League. We’ll have to be strong in order to bring back a positive result. We’re not at all thinking about the game against Bayern, we’re completely focused on Fiorentina.

How is Juninho after his sending off at the Parc des Princes ?
It’s good to see that he is still in a competitive frame of mind. He has shown that he still possesses a desire to win, which is the trademark of all great players. He wasn’t upset not to have started, but was annoyed at how the match was going.

Do you have anything to say about the first game and Piquionne’s goal?
It’s a shame that we scored in such circumstances but we don’t feel we were at fault. We hadn’t seen that the player was down. It just happened that way.

[IMG43545#R] Fabio Grosso
It’s going to be a special match for you on Tuesday night?
Yes, I’ve often played against them, on their pitch, but I’m mainly thinking about the big match we have and the qualification that we can achieve.

How is the OL squad?
We’re calm, our objective is clear. We have faith in our strengths, our hard work and our experience. We’re looking to get a positive result.

And Fiorentina?
We know all about Fiorentina’s players. They will most definitely be up for the game. We started well in the first match and showed the strength of our character by getting back into the game. This is going to be a huge game