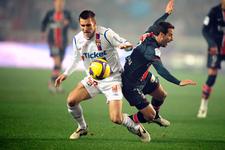 With their load of injuries and complicated circumstances, OL conceded at the Parc des Princes their second defeat of the season with the goal coming from Giuly (25'). Anthony Réveillère was injured during the game.
A big match was waiting for Lyon at the Parc des Princes against a Paris SG side that has refound its form. Deprived of a number of players (Bodmer, Pjanic, Grosso, Toulalan, Delgado, Santos), Claude Puel placed his confidence in Lamine Gassama at right back and called upon the young left back Kolodziejczak for the very first time.

Right at the start, a contact between Giuly and Réveillère set the tone of the game. OL’s fullback picked up a knock but was able to continue. Just afterwards OL obtained a corner and carved out the first chance of the match, a half volley from Karim Benzema punched away by Landreau (4’). Anthony Réveillère, injured at the start of the match, finally came off being replaced by Timothée Kolodziejczak (12’). Hoarau tried to curl a free-kick in from 25 metres, but it was no danger for Hugo Lloris (18’). The OL defence was surprised by a Ceara which dropped into the six yard box and bounced over to the back post where Giuly got the better of Gassama (25’). Paris were in the lead! Sidney Govou attempted a shot from long range but Landreau pushed the ball out for a corner (35’). Cris moved forward to give the OL attack extra numbers and dropped in a pass behind the Parisian defence for Fred, but he came up too short (43’). Monsieur Lannoy brought the first half to an end with the score at 1-0 for a realisitc PSG side.

Lyon came out for the second half with excellent intentions, but Paris were well grouped and space on the pitch was difficult to come by. With his side unable to do anything, Claude Puel decided to bring off Karim Benzema for Juninho (59’). After an excellent collective movement, Juninho tried to fire in a volley, but also ended up feeling a strain (66’). This did not stop the Brazilian hitting the target from a 30 metre free-kick just a few minutes later (73’). The OL number 8 takes part in all of the sides good phases but from an insignificant incident he lost his calm and kicked out at Armand. Monsieur Lannoy did not hesitate and brought out the red card! Kim Källström fired off a shot, in vain once again (81’). Fred, completely alone in the Parisian defence managed to get himself into a position where he could shoot (86’) but his effort was saved by Landreau! Down to 10 men, OL were unable to equalise.

With their load of injuries and complicated circumstances, OL conceded at the Parc des Princes their second defeat of the season. The players will have to recuperate well before their big match against Fiorentina this Tuesday.
Facebook
Tweet
Forum