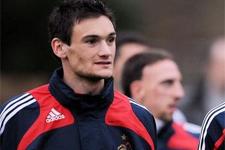 Eight Lyon players were in action on the international stage last night with their respective national sides. A round-up.
France – Uruguay 0 – 0 (0-0)
The French side only managed a draw with Uruguay. Lloris picked up his first cap with the National side and played the full 90 minutes. He put in a good performance, especially in his aerial game. Toulalan played out the entire encounter. Benzema came on (58’) in place of Ribéry. Boumsong was an unused substitute.

Greece – Italy 1 – 1 (0-0)
Goals: Greece: Ghekas ; Italy: Toni
Italy were only able to draw in Athens. Grosso, who hadn’t turned out for the Squadra Azzurra since the 6th of September, played the entire 90 minutes on the left of the Italian defence.

Holland – Sweden 3 – 1 (1-0)
Goals: Holland: Van Persie (2), Kuyt ; Sweden: Källström
Sweden lost their match in Holland. Källström, who started on the bench, came on in the 46th minute and was able to score 3 minutes later, pulling his side back to 1-2.