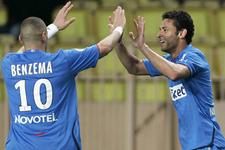 OL won this game by the smallest of margins thanks to a goal from Fred (55') and put in a great performance in the Principality. This is OL's third win in a row in the League.
For this game away to Monaco, Claude Puel continued with his policy of squad rotation. Juninho and Keita stayed in Lyon while Karim Benzema started the game on the bench. So OL started with Fred Chaves up front surrounded by Kim Källström and Sidney Govou who was making his big comeback after an absence of six weeks. Chelito Delgado was playing through the middle, just behind Fred.

Lyon started the game strongly with Cesar Delgado involved in all of OL’s attacks. Adriano was played in behind the OL defence and fired in a cross/shot which lobbed Lloris but Réveillère was there to clear the ball out for a corner (12’). Delgado slid the ball to Fred who had his back to goal, the Brazilian span around and shot, but his effort was weak and Ruffier was able to catch it easily (19’). Kim Källström made to hit a left foot effort, then finally moved forward a few more metres and fired in a right foot effort, but he hit the ball into the ground (25’). Jérémy Toulalan fired from 20 metres out but Ruffier was on the trajectory (26’). Kim Källström was once again unable to beat the Monaco keeper, this time with a headed effort following a cross from Toulalan (28’). Hugo Lloris was only called into action on one occasion, by Mollo, but caught the ball without much effort (43’). The teams go in at the break with this score of 0-0. OL had dominated but were unable find that little spark up front which would have allowed them to open the scoring.

Karim Benzema came on in place of Sidney Govou and the second half could commence. Benzema played in Källström with his first ball, the Swede played a cross into the box but Fred was unable to reach it (46’). Karim Benzema created a chance for himself out of nothing with a control in the box he span round a fired in a left footed effort but missed the target (54’). Kim Källström picked up a ball on the left and played the ball into the first post and Fred surged out to poke the ball into the net (55’)! 1-0 for OL! Monaco teid to react through the Korean Park who went around the OL defence and shot but Hugo Lloris was equal to his effort (58’). Licata also scared OL when he span and shot, but his effort went just wide (69’). Fred came off for Ederson (71st) and just after this Monaco hit the post when Mollo headed a cross in. Following a free-kick, there was a mix up in the OL box, with Lloris throwing himself onto the ball and receiving Simic’s studs in the face (79’). A superb cross from Delgado for Ederson who was all alone at the back post, but the Brazilians half volley was pushed out for a corner (82’). Ederson carved out a chance for himself and fired in a shot but Ruffier was able to punch the ball away (88’). Meriem had one final clear cut chance with a diving header from 7 metres out, but the former Sochaux player was unable to hit the target (91’).

OL won the game by the smallest of margins but showed some great things this evening in the Principality. The top of the table remains unchanged, OL conserving a four point lead over OM and 6 over Bordeaux.
Facebook
Tweet
Forum