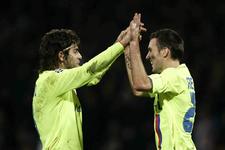 Reactions from the OL camp after the victory over Steaua Bucharest.
Claude Puel
We wanted to win this match. We’re plodding along and winning which is good. The team put in a good performance and it’s nice to combine that with a good result. In the first half we tried to play, but Bucharest were well in place and defended deep, it was difficult to make the difference on a field that was difficult to play on, we put in an awful lot of effort. We scored just before half time thanks to Juninho. I was a bit worried for the second half after our performance in the first. Physically, we were not very fresh but remained organised and managed to resist. Steaua are a quality side and that was shown this evening. We stayed organised and that is why I consider the team to have done their job tonight, in difficult conditions and having used a lot of energy.

Jean II Makoun
They covered the field well, played well, took risks and weren’t in any hurry. There were times when we had to chase the ball. But we remained courageous, played as a team, we knew that at any moment we could get through and score a goal. Mathematically this is a good result for us. On the field we only had one thing in mind though. We know nothing is over yet and we need another victory in order to be sure of qualification. The played deep and stopped us from using our long game, when they had the ball they were well positioned all over the field. It was up to us to find a solution. The first goal came from a free-kick because things were so tight. In the second half, before the second goal, you could see they knew what to do with a football. They made us do the running, they wanted to get back into the game and threw themselves into it. We took advantage of this to counter attack and score the second goal.

Ederson
Steaua came here to defend and that is what they did. But we managed to harry them and recuperate the ball on a number of occasions. That helped us a lot, and then there was the super free-kick from Juninho which opened things up. Afterwards we defended as a team. It was great to be able to kill the match off by scoring a second goal. We’ve made a big step towards qualification but we are aware that if we put in a good performance in Florence we can qualify, so we’ll do all we can for that. The pitch was quite heavy and it was difficult to play a technical match, but it was difficult for both sides. On a mental level, we all worked very hard and deserve to win the game. Steaua are a side that defend well and who are very physical. But the referee was very good and there are no problems. We managed to impose our style on the game. It was good to win, now we can concentrate on the League.

Hugo Lloris
Steaua looked like they had been told to stay back, to counter attack and take advantage of any errors we made. We didn’t commit any, we were serious and strong in our duels. We were lucky enough that Juninho opened things up with his free-kick just before half time. It allowed us to play more freely. It changed the match as, in the second half, Steaua had to get back into the game and opened up a lot more. That allowed us to break on the counter attack a few times while still controlling the encounter. We have a lot of matches before the one against Fiorentina, first and foremost we have to get through the League and Coupe de la Ligue games well. We are Lyon, we have a duty to give our best in all competitions. It’s true, qualification is looking more and more possible, but anything can happen. We’ll have to prepare well for the match against Fiorentina. It will be up to them to go looking for the victory as if we are well prepared, if we do a good job defensively, without taking any risks, we can bring a positive result home.

Juninho
It wasn’t an easy game, it seemed that Steaua were playing much more freely than they did at home two weeks ago. It was very difficult to play as they were all behind the ball. When we recuperated the ball high up the field, we were able to attack straight away. Once again we opened the match up with a set piece. The last ten minutes were very difficult as well but Anthony was able to kill off the tie following a good pass from Delgado.

Anthony Réveillère
I would like to score more, without really being focused on it. As a defender, your first task is to defend not to get forward. But when you find yourself in the right position, you give it a go! I took a risk in scoring the goal. There were 3 or 4 of us attacking. When you find a space you break into it. You can smell it coming and I did. Things turned out well, but I have to see it on television! This is a good result for us. We will go to Fiorentina looking for a result, knowing that a draw will be enough for us to qualify. For now, we will be focusing on recuperation and getting back into League action.
Facebook
Tweet
Forum