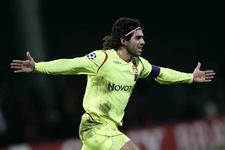 OL disposed of Steaua thanks to a thirty metre free-kick from Juninho (45') and a magnificent goal by Anthony Réveillère (89'). They will qualify for the last 16 of the Champions League if the bring back at least one point from Florence in three weeks time.
The sole objective of the evening was a victory. Mission accomplished: after a nervy second half, OL secured an important win in their search for qualification to the last 16 of the Champions League. This second win over Steaua Bucharest in two weeks, has assured OL at least a place in the UEFA Cup. But Claude Puel’s men are aiming higher. If they manage to draw against Fiorentina, in three weeks time in Florence, they will be guaranteed a spot in the next round of the Champions League, for the sixth season in a row. The draw between Fiorentina and Bayern in the other group F match suits them well. A qualification is in view but Gerland trembled for long periods of the match, right up to the second goal, a powerful left footed effort from Anthony Réveillère.

OL were quiet at the start of the match, perhaps worried that they would concede early on as the had done two weeks ago, they tried to strangle a Steaua Bucarest side who, because they didn’t put in much of a performance look like their second half of the season could be quite morose.

In the first half, the Romanian side only managed to create one chance: a volley by Kapetanos caught by Lloris at the second attempt Lloris (45’+1’). And two after the break, which was insufficient to hope for a continuation of their European adventure in the Spring.

It has to be said that the OL defence, who did not concede a goal for the fourth match in a row, were well in control of their match, taking advantage of some great closing down by the entire OL side.
Offensively things were not so clear. A long range free-kick from Juninho missed the target (3’) and another only found the gloves of the Steaua keeper Zapata (13’). After turning on a coin, Karim Benzema curled in an effort that the Romanian keeper punched away (15’). Anthony Réveillère then saw his effort blocked by Ghionea (25’).
Then Juninho popped up at the end of the first half. To start with there awas a familiar situation: a free-kick from 30 metres out. The Romanians had allowed Cris and Grosso to get into the wall. When they both steeped out, Juni took advantage of the gap to fire home the opening goal (45’) and to score his 16th goal in the Champions League, coming level with Sonny Anderson at the top of the OL goalscoring charts in European competition , his 94th in an OL shirt in all competitions (again, like Sonny Anderson).

Whether they are direct or indirect, Juninho’s free-kicks have been a lethal weapon in the OL armoury over the years. From one of them, after the break, Jean II Makoun had his jersey pulled and was held back without obtaining a penalty (52’). And if that wasn’t enough, « Juni » placed a corner directly on the Cameroon internationals head, only to see Marin clear the ball off his own line (53’). Barely on the field, after replacing Kader Keita, César Delgado played in a great cross to Kim Källström, whose volley went wide (74’).

But, as they had not been able to make the break, OL trembled right to the death . Tiago Gomes hit directly at Lloris (60’); a free-kick from Ogararu grazed the upright (69’). Deliverance came after a long run from Anthony Réveillère playing a one-two with Cesar Delgado (88’), and with it an immense « sigh » of relief .
Facebook
Tweet
Forum