OL: a victory of champions 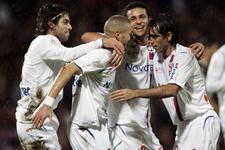 OL won their game against Le Mans, normally in form away from home but uninspired this evening, without having to force too much. OL's goals were scored by Benzema (22') and Juninho (56').
Just as he had done against Sochaux last Wednesday, Claude Puel chose a 4-4-2 formation to start the match. Chelito Delgado was in the starting line-up for the first time this season.

The match kicked off under a light autumnal rain. Cesar Delgado was involved in all the good moves at the start of the match. After linking up well with Benzema, the Argentinean tried his luck, but his effort was blocked at the last moment by a defender (5’). Lyon dominated the opening minutes of the match but there was a feeling that Le Mans could catch them on the counter attack very quickly. Juninho hit in a long range free-kick and the bounce came very close to taking Pelé by surprise (15’). As is often the case, it was the inevitable Karim Benzema who liberated Gerland. Moving up the right wing from the half way line Benzema slid past his defender and fired a shot into the top corner of the goal (22’)! Kader Keita and Karim Benzema both came up short against the Le Mans keeper (25’). Fred showed what he is capable of from a Keita cross, but his header was just not powerful enough (34’). As Monsieur Jaffredo whistled for half-time, with OL logically leading 1-0, the rain doubled it’s intensity.

Juninho opened hostilities in the second half with a free-kick from twenty metres out which Pelé was forced to punch away (55’). Juninho picked up a ball lost by the Le Mans defence then played in Benzema who was tackled. The ball then came back to Juninho who, unmarked in the 6 yard box, took all the necessary time to slide the ball past Pelé (56’). 2 goals to 0, the match looking well and truly in the bag, Claude Puel decided to bring off Benzema and Juninho for Ederson and Makoun with the game against Bucharest in mind. The Le Mans players tried timidly to get back into the match, a free-kick from Cerdan going just wide (72’). OL continued pushing forward in the final minutes with Källström coming on. The Swede tried his luck but Pelé managed to push the ball away (87’). Lyon then took their foot off the gas and coasted home to a 2-0 win.

Lyon won their match against Le Mans in style and now have a 4 points lead over Marseille. The next game will be on Wednesday at Gerland against Steaua Bucharest.
Facebook
Tweet
Forum