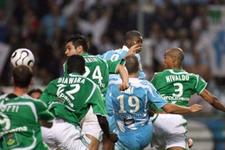 This weekend sees match 12 in the League...OM-Saint Etienne is the big game of the round, but there is also an interesting OL-Le Mans. Bordeaux travel to Nancy...Toulouse are at home to Caen...
Lille, cant hey continue their run? At home to Nantes, Rudi Garcia’s men look to have a game well within their capabilities, especially as they will have some players back from injury. Nancy are in a precarious position with only 9 points. What has happened to them … Bordeaux are coming to the Stade Marcel Picot in good spirits after their destruction of Le Havre and their second place in the League.

Nice – PSG? Always a big game. A match between two sides in the top half of the table. Nice have taken 2 points from their last 2 matches, thanks to two penalties. PSG were unable to confirm their good form, after their win against OM, at home to Toulouse. They will need to turn things around at the Stade du Ray. Toulouse and their iron curtain of a defence, continue to surprise. Just 3 points behind OL, Toulouse have a good chance of continuing their good run at home to Caen for whom Savidan is an important element. This TFC – Caen will also see the duel between the goalscorers Gignac and Savidan.

Lorient have taken 6 points from 2 matches and are out of trouble for the moment. Grenoble are unbeaten in their last three games, including two away from home. A third match far from home without problems is well within the capabilities of this experienced side and their watertight defence; the best in the League alongside Toulouse and OL. Auxerre created a big surprise beating Le Mans away from home, thanks to this result they managed to move up the table. Valenciennes are in the relegation zone and haven’t won for a long time. The men from the north need to be careful!

OM need to turn things around at home. They have only taken 1 point from the last two games, at a time when they could have gone top of the League … Saint Etienne are in freefall … Will they continue? Two sides « in danger ». Rennes are plodding along in decent form, unbeaten at home, they have the best attack (at home) in the League with 13 goals scored. They are at home to Sochaux, still bottom and without a win to their name, Sochaux will be without Perquis and Dalmat who are suspended. The Bretons are naturally favourites.

And finally, Le Havre, who are in need of points after the thrashing they took at the hands of Bordeaux, in order to sleep a little easier. Monaco at last took all 3 points at home and have a good chance of a result from this away game.