OL back in winning form 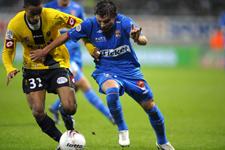 OL refound their winning form at the Stade Bonal. Paradoxically, Claude Puel's men played very well in the first half but were ineffective, while in the second half they showed less but managed to score two goals.
It was expected, Claude Puel decided to rotate his squad for the trip to Sochaux. The coach put in place a 4-4-2 formation for the match tonight. This was also the first match in the League 1 for the young full back Lamine Gassama. Anthony Réveillère, was moved up to play on the right wing.

The rain was falling heavily on the Stade Bonnal, making it difficult to string together good passes and to control the ball. Anthony Mounier created the first chance of the game, capitalising on a slip by Perquis but the young OL player forgot to shoot and was caught out (5’). Benzema took his turn at shooting after being played in by Fred with his back to goal, but his effort did not worry Richert (17’). OL then carved out a huge chance after some great play by Gassama who played in Fred. The Brazilian slipped past his defender and passed to Benzema who missed the target from only 8 metres out (23’). Lyon were racking up the goalscoring opportunities in the game. From a Fabio Grosso corner, Richert missed the ball but Karim Benzema came up just too short to push the ball into the net (27’). Fred and Benzema played each other in again with the French international hitting the post of Richert’s goal from about twenty metres out (32’). Claude Puel’s men dominated this first half without being able to put the finishing touches on the numerous chances.

Sochaux came out in the second half and were the first to get a shot in. Santos tried his luck, but his effort caused no problem to Rémy Vercoutre who dived perfectly to save (48’). The OL keeper once again showed his worth when Birsa fired in a long range effort (57’). Fabio Grosso, who took a knock to his ribs, had to come off (59’). Anthony Réveillère moved to left back and Mounier left the field, while Keita and Delgado came on. The Argentinean was quickly in action playing in a cross for Fred, but the Brazilian was unable to hit the target (64’). OL finally found a way through, a little against the run of play. Karim Benzema picked up the ball 30 metres out from goal, moved forward and then let fly a real cannonball effort which flew in just under the crossbar (66’)! Sochaux ended the game with 10 men, after Dalmat was sent off for a dangerous tackle on Miré Pjanic (79’). The young OL player could continue, but was limping a lot. Sochaux threw everything they had into the game, but after a fantastic counter attack led by Karim Benzema, Chelito Delgado was played in and fired the ball past Richert! This was the Argentinean’s first goal in an OL jersey!

OL won a difficult match, but the essential is the three points they take home with them. The match will be remembered for the first appearance of Lamine Gassama in the starting line-up as well as Chelito Delgado’s first goal in the League 1.
Facebook
Tweet
Forum