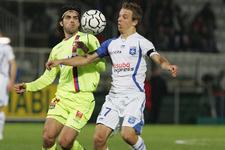 For the third game in a row OL have missed out on victory. Against an Auxerre side that carved out the best chances, Claude Puel's players go home satisfied with their point.
Claude Puel put out the same team that started the match in Bucharest on Tuesday for this game against Auxerre, with the exception of Jean II Makoun who started on the bench, was replaced by Kim Källström, and Rémy Vercoutre who came in for Hugo Lloris who is ill.

OL quickly took control of the game and Ederson was the first to be in action with a header that flew just over the bar after a cross from Fabio Grosso (5th). Kader Keita gave the Auxerre side their first real scare. The Ivory Coast international coasted around his defender and tried a lob from twenty metres out which dropped onto Rémy Riou’s crossbar (8th) . Auxerre replied straight away though with Jelen forcing Rémy Vercoutre into a great save (12th). Karim Benzema created an opportunity for himself after a corner but he was unable to hit the target, screwing his shot wide (24th). For Auxerre, Lejeune came close top opening the scoring but his effort ended up in the side netting of Vercoutre’s goal (34th). Corners and crosses flew in abundance in front of Rémy Riou’s goal but Auxerre stood firm. They stood firm and a little bit more, as from a counter attack Jelen found himself one on one against Vercoutre. The goalkeeper saved his side with a firm hand (41st) just afterwards Narry saw his close range header go wide (42nd). When the referee blew for half time, it was clear that Auxerre were ahead on points.

OL’s coach decided to bring on Miralem Pjanic in place of Kim Källström for the second half. The young Bosnian was quickly in the thick of things heading just wide a cross from Fabio Grosso (52nd) then playing in a cross which was deflected over his own crossbar by Grichting (60th). A few minutes later (64th) Jelen played in well by Oliech was only able to hit the post. The match finally came to life Keita-Benzema playing a double one-two, but Benzema’s shot went wide of the target (67th). Claude Puel threw his last munitions into the game with Fred coming on for Ederson (73rd). Auxerre dug in their heels even more and could have gotten something when Rémy Vercoutre knocked down Oliech just outside the penalty area but the referee was not moved (81st). The end of the match was difficult for OL, but the score would remain unchanged.

The two teams shared the points and Lyon can be satisfied with that, after all the better scoring opportunities that were created by Auxerre. OL will not have long to reflect on the match as they have another game away to Sochaux on Wednesday.
Facebook
Tweet
Forum