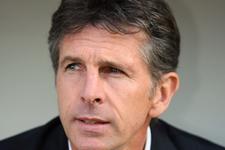 Claude Puel held his traditional press conference, 48 hours before the game against Auxerre...
A review of the injury situation :

Lloris : he has throat problem. He was suffering from it before the match in Bucharest. It is not sure he’ll play against Auxerre.
Fabio Santos : has started running again.
Mathieu Bodmer : he is still being taken care of. No date has been set for his comeback.
François Clerc : he is still working with the physios.
Sidney Govou : he’s working on the bike.
John Mensah : he’s continuing treatment. He’ll probably be out for around a month.

Is it difficult to come back to the L1 after a game like the one in Bucharest?
« I hope not. I hope that we’ve learnt the lesson from the game against Rennes where we took a big slap in the face. We don’t have time to decompress, we just have to keep going. The squad likes to be playing everyday, afterwards they have to recuperate though. Training is very important at the moment ».

Can you explain the poor starts to games the team has had ?
« If we only knew the reasons … Early on in the season we started games well, now it’s the other way around. But it concerns the whole team. We need to be more concentrated in our pre-match preparation … ».

Do you have any solutions for the defensive problems ?
« There have been times when we have been more effective in that sector. We have to kick-start the machine again. Everyone will gradually up their levels … We cannot let it get to us …on an individual and collective level we can do a lot better. Any solution will come be collective. But you know, we are still there, despite all the injuries, and the poor form. It’s not a deep-rooted problem. Things will get better ».

The game at Auxerre ?
« Auxerre are a side that play good football, they are solid. They often manage to create a lot of chances; against Rennes they weren’t able to take advantage and maybe deserved better. I don’t think there will be many changes for the game against Auxerre. The squad is there, attentive, concentrated and the recuperation has been good. We’re going there to get a result, play better and take points as usual. »
Facebook
Tweet
Forum