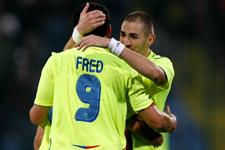 All the reactions from the Lyon staff and players after their victory in Bucharest.
Jean-Michel AULAS
"Extraordinary. We went through every possible emotion this evening. We wanted to see an Olympique Lyonnais that could win,but also an Olympique Lyonnais that could be spectacular and who could be loved by turning situations around. We wanted people to love us and we managed to get back some of our virtues. I was scared at 2-3. It was terrible that they went ahead just before half time, I thought it was going to be difficult to get a result. At 2-2, the team had gotten back on an even keel, but what an attacking game it was. OK we conceded 3 goals but these 5 goals scored away from home are great and will give the team a lot of confidence.
Bravo to Claude (Puel) who managed to get his team to perform. Some mountains have been moved aside now. We have some exceptional players, I though Karim had a great game, so did Juni, well I can’t go on to list them all.
Fred had a fantastic game too, he showed all his talent, even after just coming back from injury. His first goal was a very powerful effort. At the start we said that Bayern and Fiorentina were our two main rivals, but we also knew Steaua would be difficult to play away. We know where we are going, we didn’t lose against the two clubs that were supposedly stronger than us. We are on the right course. If we do well against Steaua in two weeks, it will set up a great finale for the last game at home to Bayern."

Claude Puel
"It was quite a match, you could even say it was a bit mad. I like those kind of games, being able to turn around situations, the players showed that they have very strong characters. It’s great, we put on a show, don’t give up, go right to the end of everything, and tonight we managed to do it all. Bravo to my players, even if some of the play leading up to their goals was bad, it was a big thing to be able to claw our way back, to make the difference.
Well done to them, this is the kind of game that will make the French public appreciate watching us, there was quality in the play. Now we just have to wait for the next edition. We can’t keep conceding goals like that. It’s a big handicap. It’s the second time that has happened to us in the Champions League and it has happened two or three times in the League.
But we managed to pick ourselves up and we are still standing. You have to have the guts to go out and turn a match around like that. Things have to be changed but I prefer to concentrate on the positive side, what the players managed tonight is amazing. I love seeing my team react like that, show their character. If they weren’t competitors they wouldn’t be able to do such things. Certain players are getting back into the swing of things, like Kader (Keita) who needed to be playing, her played well, the team did as well, they showed their desire, it’s just a shame that we penalise ourselves on set pieces and crosses. But the defence did show some quality. We have a long way to go and have been blowing hot and cold. 5 points is good. It could have been better, it could have been worse, but nothing is over yet. Even for Bucharest, we have to play them at home now. They can be dangerous from set pieces, they do not have to play the game. We’re going to have to go looking for our qualification. But we’ll stand up and be counted.
As manager, I’m already thinking about the game against Auxerre. The amount of energy we put in to turn the game around will be a problem for us."

Jean II Makoun
"It was a crazy game, we were 0-2 down after 15 minutes. We came back well but then conceded a third. Each time we went down we showed a lot of character, we kept on believing, we didn’t give up on the game and that is important. We saw that we were always dangerous when won the ball and attacked, nothing was finished. If they had scored two goals then so could we, and it paid off. When we had the ball, it took us two or three passes to get in front of goal. It’s a shame that we conceded three goals from set pieces. We put in a lot of effort to get back on level terms. At half time, we said to each other that we could win the game, that we could pull off an exploit. We did manage to and there is nothing else to say about our victory.
Personally, I’m getting better, as are my team-mates. I’m happy for the team. 5 points is a good haul, especially as we have to play against this side at Gerland as well. We’ll have to put in a good match, if we manage to take all three points it would be could for our future in the competition."

Hugo Lloris
"It was a nightmare evening for a goalkeeper. At 0-2, I hadn’t even made a save. Once again we showed the superb team spirit we have, we fought to win this game, that’s what we have to remember about tonight's match. We have to keep working on set pieces, even if they were well taken tonight. We cannot keep making as many fouls as we do. We put ourselves behind and then we have to make up the ground. We managed to react, showed our talent and a great team spirit."

Karim Benzema
"I’m glad that we are going home with a win. It was important but far from easy. We started really badly and conceded two quick goals, a little like the France-Romania game (2-2). But this time we managed to turn the game around and win it.
I’m happy to have scored two goals, I’m also pleased for Fred who came on and scored as well. We showed our strength of character despite the fact we were behind. We didn’t let go and managed to change the game. I was really annoyed that we conceded the two goals at the start of the match.
But what counts tonight is that we can take home all three points. I scored a header, which isn’t something I do very often. It’s not one of my strengths but I’m working on it."

Cris
"The first half was difficult for us, we conceded two goals that we wouldn’t normally concede. Afterwards we equalised and got back into the match, but then conceded another just a minute before half time, that was tough. We had a good discussion at half time, we didn’t give up and believed in ourselves. We got back into the game together, that is one of OL’s strengths, when we play as a team it’s very hard to beat us.
The goals that we concede from set pieces are difficult to explain. We train and work during the week, it’s complicated and hard to explain. We have to be more aggressive. We kept the ball on the ground and played our game well, it was easier for us. At the start, however, we tried to find Karim with too many long passes. Afterwards, we kept a hold of the ball and that was important for the team. Do we look like qualifying? We have to respect our opponents. Now we have to make the difference at home."

Juninho
"We gave ourselves a good scare at the start, taking two goals in quick succession. I’m happy that we won. We worked as a team, everyone tried to get the ball back together. We wanted to win. We didn’t give up. We showed all the quality we have in scoring those goals. We are talented as far as that goes but we have t put in more work. We have a lot of character. Now, we have to work harder on our concentration at set pieces. I’ve played in the Champions League eight years in a row. That gives you experience in certain situations. I feel quite privileged. Now, we have to keep our heads on our shoulders, we are talented, have a lot of quality,the whole side put in a good performance and we deserve our win. I’m confident that we will qualify, but we have to keep working, none of the other teams will give up either. Our objective is to confirm our good performance at home."