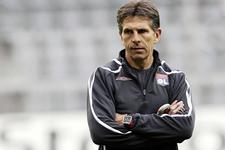 Claude Puel will be up against a club that he managed for six years on Saturday when OL play Lille. Of his time at Lille, he remembers more than anything the adventures he shared…
Of course he can remember every detail of the 6 seasons he spent there. He remembers that everything started in the 2002-2003 season with a misunderstanding , as he put’s it. The club, who had just participated in the Champions League, had lost there best players during the summer and the budget had gone from 50M to 19M euros! « We had to work hard, take what we got and start from a new base ». As time went by the hard work paid off. Without forgetting his refusal to leave the North for Portugal and Porto where he was offered the post vacated by Mourinho in 2004-2005. « This decision strengthened the group … ».

Because of this, Lille climbed up the hierarchy of French football, finishing 2nd (2004-2005) and 3rd (2005-2006). They once again tasted the joys of the Champions League and even qualified for the last 16 during the 2006-2007 season, but were frustratingly knocked out by Manchester United. «After this elimination our heads went down and we slipped down the table in the League, the group split and everyone started thinking of their own futures … ». The builder once again had to roll up his sleeves and start all over again with a group of youngsters. « I knew that the start of the 2007-2008 season would be difficult . But after 6 difficult months the team started showing what they could do. The work paid off and a new group was in place. They proved and will prove it again … They only finished one point away from a European spot ».

What does he retain from the seasons spent there ? «Mainly the adventure. It was an adventure lived by the whole team . We all fought to build the training ground, for the stadium project, for the results. The club is on a firm footing now. Yes, a big adventure that started out from nothing. We managed to do great things with few resources and people who love the club . And the players? There were many who were important at specific times. Some of them proved that you can break onto the scene at 24 or 25 years of age. Youngsters broke onto the scene as well. Patience, shown to everyone, was important as well. We took some risks, but they were worth taking. It’s important for a club to be able to count on players coming through the ranks. »

When you draw up a list of players given their chance in the League by Claude Puel at Lille , you can come up with 12 wh are still at Lille (Debuchy, Dumont, Fauvergue, Cabaye, Francquart, Rami, Plestan, Chejou, Lebbihi, Ewane Elong, Hazard, Vandam). 2 are now at OL (Bodmer and Makoun). Not even mentioning the players who have left the club from the north (the Robail brothers, Fortuné, Tahirovic…) or the foreign players who were unknown in France (Keita, Tavlaridis, Vitakic, Schmitz, Bastos,Lichsteiener, Manchev…). In total, the number of those whose careers he started is near to forty !

Is he closer to the players that he threw into the game ? « I’m not very close to the players I coach as I ask an awful lot of them … But I do keep in contact with them even the players from my time at Monaco ». Will this match against Lille be special ? « I think it will be for Lille. There are a lot of players there that know me. It will be the match of the season for them. Me, I know what they are capable of … ».
Facebook
Tweet
Forum