Fabio Grosso back in time for Lille 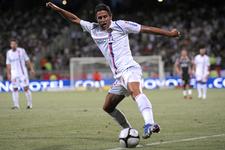 Claude Puel confirmed today that Fabio Grosso should make his return to competitive matches against Lille, on the 18th of October at Gerland.
Absent from the team for the last month becuase of the broken ribs he suffered during Italy's World Cup qualifying match with Cyprus, on the 6th of September, the Italian international took part in the match between the OL CFA side and the OL under 18 side, an opposition which took place this afternoon in the form of two 30 minutes halfs.
After the game the defender admitted that « he didn't feel any pain anymore ». « He wasa little apprehensive and getting back into training will allow him to get over that, stated OL's manager. Now he has to play in order to get his match fitness up to scratch. »

Puel was also confident about the ankle injury suffered by Kader Keita, who « did not need any examination ». Fred, who is in Brazil at the moment, will be back amongst his teammates on Friday. César Delgado, who is still suffering tendon pains is not available.
Facebook
Tweet
Forum