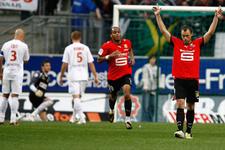 Claude Puel's players have conceded their first defeat of the season. A defeat that cannot be questioned, OL were well and truly beaten by a Rennes side with Mickaël Pagis in gala form.
Claude Puel called up 20 players for the trip to Brittany. Fabio Santos and John Mensah watched the match from the stands, but Kader Keita made his big comeback, the Ivory Coast international slotting in down the right of a 4-4-2 formation concocted by Claude Puel.

The Rennes player Jimmy Briand gave OL their first scare of the match, the Breton forward breaking down the left but Mathieu Bodmer got back perfectly and made an outstanding tackle (2nd). Karim Benzema responded in the best possible way but his shot went just wide of the post (5th). Briand, again, was then unable to win his duel with Hugo Lloris (12th). Both sides were giving as good as they got but at the same time lacked lucidity as they approached the opposition penalty area. It was in the 17th minute that Pagis, connecting with a cross from Sow, opened the scoring with a first time effort just inside the post. Lyon had conceded their first away goal of the season. Briand continued his hard work, driving Anthony Réveillère crazy, so crazy that the defender was booked in the 33rd minute for a very dangerous tackle. The only sign of hope for the second half came from Karim Benzema (43rd) when he fired in an effort after a good piece of team work.

The second half was full of technical errors and loss of possession. On two or three occasions Piquionne and Benzema came close to the Rennes penalty area but were unable to put Douchez in any sort of danger. It was the Breton side that doubled their lead thanks to another goal from Pagis (56th) which was almost a carbon copy of his first half goal. It was at this moment that Claude Puel decided to throw on Juninho and Fred in the place of Jérémy Toulalan and Fred Piquionne. These changes did not affect the Rennes machine in any way or an inform Mickael Pagis. After a poor clearance from the OL defence, the Rennes number 9 controled and fired off a volley into the top corner of Hugo Lloris’s goal (69th). An absolutely magnificent goal which left the OL players and Mathieu Bodmer no way back into the latch. Ederson tried his best to change things around but only succeeded in making Douchez look good (80th). Mickaël Pagis, the man of the match, came off to a standing ovation from the crowd at the Stade de la route de Lorient, he was replaced by Sylvain Wiltord. The efforts of Ederson then Juninho (85th) could change nothing. OL conceded their first defeat of the season and what a defeat!
The international break has maybe come along at the right time for an OL squad that is obviously tired physically and mentally.
Facebook
Tweet
Forum