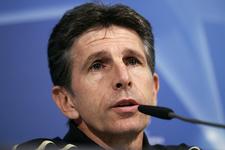 Claude held his traditional pre-match press conference...The subjects? The match against Rennes...Mounier...the strike...
A word on the injuries?
« Delgado still has a problem, he should be back next week. Fabio Grosso continues to progress. It appears that he could be back for the game against Lille. As for Sidney Govou and François Clerc, well you know the situation. Everyone else is available ».

Did you watch Rennes in the UEFA Cup ?
« No, I don’t have that channel, but I’ll be looking at the video. I did read, however, that they put in a good performance overall. It’s always tough to get eliminated after having made the efforts to qualify through the Intertoto cup».

Will you be making changes against Rennes?
« I don’t really feel a need to. I’ll see after training on Saturday morning who will start and who is apt to come on during the game. The players have put in a lot of mental and physical efforts, so there are lots of things to take into consideration. But, again, I won’t make changes just for the sake of changing. We have to make sure that everyone is fresh. We had more knocks after the game against Fiorentina than against Bayern. The match against the Italians was a lot more physical. Keita? We’ll see. He’ll have his chance. The injury to « Sid » will give Kader, Ederson, Pied… the chance to show what they can do. However, there is also Anthony Réveillère for the position ».

Are you surprised by Mounier?
« No, not really. He had a lot of potential to start with. He has a lot of endurance, fast, can go past people… I already mentioned that at the start of the season. He knows he has still to progress. For the moment he is giving his all, he has to be a little more realistic in the last third of the field. He mustn’t change his mentality as far as his work ethic is concerned. He’s still young. Can he force his way into the starting eleven? What does it mean to be first choice at OL? He has to make sure that he stays competitive, progress and not focus on the fact that he is or isn’t starting matches. Starting or coming on during the match, they are both important as far as I’m concerned. The idea of being first choice is abstract in my opinion.

What do you think about the possibilities of a strike ?
« I won’t follow a movement just for the sake of following it. First of all I want to understand what is going on, what can be changed, the consequences for those involved. I’ll make my mind up after that. I can understand the worries my players have. Everyone has to work together. What would I have done when I was a player? I don’t know if I would have been mature enough to think about it. I think the player would have probably followed the movement … »
Facebook
Tweet
Forum