Lyon build up their lead 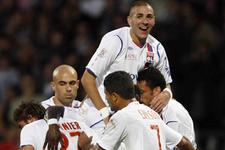 The main points of the game took place in the first half with the goals from Benzema (31st) and Fred (35th) before Nancy pulled one back through Bérenguer (37th). Karim Benzema had to come off, unfortunately, through injury (56th).
OL welcomed AS Nancy Lorraine to the Stade de Gerland looking for their fifth win in a row in the League. Claude Puel had to do without Juninho, with a groin strain, and Sidney Govou, suspended after the red card he received against Le Havre last Saturday.

When the two teams came out, a strange occurrence was observed, the three officials were wearing jerseys that were exactly the same colour as that of Hugo Lloris, luminous orange. This didn’t stop the game starting off at break neck speed with a first duel between Karim Benzema and Genaro Bracigliano in the second minute the Nancy goalkeeper coming out on top. A few minutes later (9th), Fred saw his effort from a free-kick pass just the wrong side of the post. Fred, again, was racking up the one-twos with Karim Benzema and from one of them (17th) it was an outstanding save from Bracigliano that stopped OL opening the scoring . The Nancy goalkeeper was really starting to annoy the OL forwards and continued by pushing away for a corner a curling effort from Karim Benzema (20th) which was on target. From a 25 metres free-kick the League’s top scorer excited Gerland with an effort that grazed the upright (28th). Just a few moments later Karim Benzema had the ground on it’s feet as he finished off a well worked counter attack. The OL number 10 left his marker standing, moved left and then fired in a left footed effort inside the near post (31st). OL were on fire and after an outstanding breakaway by Mounier which he followed up with a cross in front of goal, Fred doubled the score (35th). It seemed that Claude Puel’s men had done the hard work but less than two minutes later Nancy reduced the score through Bérenguer in front of a static OL defence (37th). Monsieur Bré signalled the end of this open half with the score at 2 - 1.

The second half started off at a much slower rate. Only Hugo Lloris rushing out more than 40 metres from his goal brought any excitement to the supporters (55th). Just afterwards, Karim Benzema was brought down by André Luiz just outside the box. The OL striker had to leave the pitch limping and was replaced by Miralem Pjanic. From the following free-kick, the attempt from the Brazilian Ederson went just over the bar . Pjanic rapidly got into the action with a shot from 20 metres out (64th). Ederson came off for Fred Piquionne, surely in view of the match against Bayern Munich on Tuesday (56th). For Nancy, Pablo Correa threw everything he had into the game with the successive entries of Féret and Brison. Claude Puel then strengthened up his rearguard with Boumsong coming on in the place of Fred (77th). Lyon dropped deeper down the field towards the end of the match. Only Anthony Mounier managed to get another decent chance, but his effort was pushed out for a corner (87th). OL finished the match as a real block and got the essential, all three points, before an important European tie.
Videos