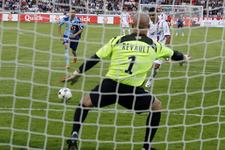 After two difficult games against Nice and Fiorentina, the OL defence held up against Le Havre. Despite the sending off of Sidney Govou, OL won 1-0 away to the newly promoted side.
As a symbol, the first effort of the match came from the right boot of Honorato Ederson (2nd). And even if it was blocked by a Le Havre defender, the Brazilian playmaker, pushed oout wide on the left, would be the man of the first half .
With a hand in all the good plays, Ederson dropped a free-kick on the head of Jean II Makoun (21st), but the Cameroon international missed with his effort. Le Havre also had goalscoring opportunities in the first half, mostly thanks to their attacker Amadou Alassane. The big Le Havre player went past Mathieu Bodmer down the right, but his cross was played away by Anthony Réveillère(19th). His second attempt, this time from the left, found the head of Jean-Michel Lesage(41st) who missed. 15 minutes later, there was Ederson whose cross was headed strongly by John Mensah, playing at left back, but Christophe Revault was able to push it over.
As he was often at the origin of OL’s offensives, the former Nice player would find himself at the conclusion of one as well. One minute before half time, following a lightening quick break which finished up with Miralem Pjanic playing in Frédéric Piquionne, the new OL striker was then brought down in the box . Juninho absent, it was his fellow countryman Ederson, who stepped up to coolly take the spot kick . After having slowed down his run up, the Brazilian opened his right foot, Revault beaten, complained, but the goal was rightly confirmed by Monsieur Kalt. Lyon lead 1-0 at the break.

In the second half, OL start by managing their lead before trying to endanger Le Havre again . The entry of Karim Benzema in place of Frédéric Piquionne made a change. The League’s top goalscorer offered a great pass to Ederson whose effort passed just wide. In the same minute, Karim Benzema lost a one on one with Revault after a wonderful one-two with Pjanic. Played in well by Réveillère, the Bosnian playmaker, came close to doubling the score, after a control and a lob which almost went into the top corner (63rd).
Lyon who had dominated and come close to finishing the game off, would start to suffer from Norman pressure after the the sending off of Sidney Govou for two yellow cards in 10 minutes (fouls on Tixier and Noro). Le Havre pushed but rarely created any real chances, and came up against a Hugo Lloris imperial in the air.
On the contrary, it was the French champions who were more dangerous thanks to an excellent Karim Benzema. The top goalscorer in the League was also altruistic on a number of occasions with Anthony Mounier. The youngster wasn’t successful in front of Revault (79th), then lacked precision with his lobbed effort (90th).

OL, logically, win their 4th game in a row in the League, and manage to keep a clean sheet after having conceded 4 goals in the last two games.
Videos