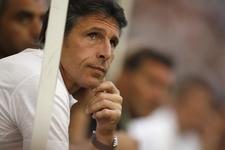 After the squad got back together following the international break and the traditional training session 48 hours before a game, Claude Puel held his press conference...
OL’s coach started off speaking about the injury situation. « Grosso will be out for around 6 weeks. Clerc is doing well. Keita had his plaster taken off and has gotten back into training. Fabio Santos is also back in preparation. At the end of the month he should be able to take part in games. We’ve bought him a boxers helmet … ».

Claude have you worked out how to replace Grosso ?
« We’re looking at things. There are solutions; we’ll find them inside the club. Some of our players are adaptable, others, like the youngsters, are full backs by training. Will the solution be temporary or definitive? You’ll see … Will Mensah play with the CFA team? We’ll see on Friday ».

Did you keep an eye on your internationals ?
« I saw the France game at the Stade de France; I’ve spoken to the others. I’ve looked at who has been playing and for how long; in view of the three games we have to play in a week. I still haven’t decided on my starting line-up for the game against Nice ».

A word on Hugo Lloris who will be up against his former teammates ?
« He’s exactly like I imagined he would be. He’s a high class keeper; he’s quite a laid back guy, he often steps back to look at situations better. He is mature for his age. It’s interesting for top level football, I don’t think his lack of experience in the Champions League will be a handicap, as he is focused on what is essential: his play on the field ».

Are you worried going into this game after the break ?
« I’m being vigilant. The group has only been back together 2 days before the game against Nice. We’re starting over; we have to get back to basics again, our concentration, our teamwork. These breaks are always difficult to deal with. You have to be ready straight away with the accumulation of matches. But that’s top level football. The players know all about the pre and post Champions League moments. I hope the message has been passed around. OL, for the last few seasons, have been the only French side capable of dealing with the rhythm that the succession of matches and competitions forces on you. Lille only managed to do it for 2 seasons. It’s something you need to learn »
Facebook
Tweet
Forum