OL keep up their rhythm 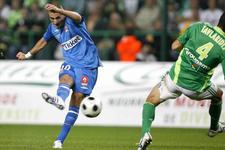 Against Saint-Etienne, Olympique Lyonnais won (1 - 0) thanks to a goal from Karim Benzema, his fourth of the season. Thanks to this victory, OL join OM at the top of the League 1 standings with 10 points from 4 matches.
A successful evening all round for OL, on a regional and national level. It’s becoming almost insolent, OL haven’t lost to their neighbours from Saint-Etienne since 1994. Worse: tonight, ASSE lost to an exploit from Karim Benzema, the only Lyon native in the OL starting line-up at kick off .

At the end of the fourth round of games, Laurent Roussey’s men are still stuck at the bottom end of a table that OL top. In second place (behind OM on goal difference), OL confirmed their recent strengths: a cast iron defence and a Benzema in top form, Benzema, who is top of the scoring charts with 4 goals in 4 games.

Despite the suspended Grosso and the absence of Cris, OL’s defence managed to prolong their invincibility with an unusual line-up : Källström on the left, Boumsong and Bodmer in the centre, Réveillère on the right. Despite playing out of position, Källström was rarely in difficulty. On two occasions Feindouno and Payet got past hilm to deliver crosses that were snuffed out by Bodmer (32nd & 68th).

Slick passinfg play was not easy after the downpour that hit Geoffroy Guichard one hour before kick off. In the first half, both sides had trouble playing their forwards into dangerous positions. Only Benzema, after a one-two with Ederson, managed to get into the ASSE box but was unable to trouble Viviani (15th). Apart from a Boumsong header that went over (21st), OL’s attacking record was summed up by a host of long range efforts from Makoun (4th), Ederson (14th & 36th) and Juninho (44th) and a series of set pieces from Juninho that no OL player could connect with (10th, 17th & 25th).

Saint-Etienne are still trying to find their feet at the start of this season and were unable to impose their game on the match; against an OL side who look like they still can progress a whole lot, the ASSE midfield spent more time trying to stop their counterparts than to actually create anything, contenting themselves with deep passes for Gomis to chase, but the French international first of all shot too early (16th) then was beaten to the ball by Lloris (53rd).

And when the fine rain that had followed the deluge finally stopped, Benzema brought down some thunder on the ground. After being playerd in by Ederson, the OL forward silenced Geoffroy Guichard with a curling effort (56th). This season, the League’s top goalscorer has put away 4 of OL’s six goals, in three different games, for as many victories.

After this goal, Saint-Etienne tried as hard as they could to grab a goal that would have brought a draw, which would have been good for their morale if not their League standing, through Matuidi (62nd) and Dabo (65th), but it was almost Piquionne (73rd), in response to the whistling of the Geoffroy-Guichard crowd, then Källström (79th) who could, without two saves from Viviani, have offered an even larger victory to OL, and the top spot in the table. Despite taking 10 points from 12, OL are behind the leader OM, but the collective demonstrations of the two teams leave all talk of arithmetic out of the equation. Thanks to an almost perfect month of August, OL have started off their season in the best possible manner.
Videos