Allyou need to know about Saint-Etienne 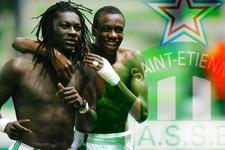 Saint-Etienne have not started their League campaign off well. Finishing in fifth place in the League last season, they came into the new season with legitimate ambitions....
Saint-Etienne will be making a return to European competition in a few weeks time, the fruit of a good 2007-2008 season. Few players have left the squad in the off season, the new recruits (Monsoreau, Sauget, Matsui, Grax, Machado…) coming in to strengthen the group … and Luc Sonor, a new face on the bench has come in to assist Laurent Roussey.

2 goals scored ; Feindouno from a penalty and Matuidi. 56 shots.

3 goals gonceded including one penalty. 34 shots.

18 players used. Viviani, Tavlaridis, Monsoreau, Dabo and Feindouno have played all 270 minutes of the season. Gomis, Dernis, Matsui, Payet and Matuidi have taken part in all 3 matches.

30 895 spectators were present for the game against Sochaux.
Videos