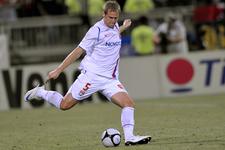 What does it feel like, playing in the centre of defence ?
« Well, first off it’s good to be in the first team at the start of the season. But we’re only at the start of the season and there is a lot of competition for places. Central defender? I’ve already said that I prefer playing in the midfield. I’m enjoying playing at centre back at the moment though. The difference with last season? I knew it wasn’t going to last. Right now, I don’t know. What I do know is that the competition for places is fair. I’m not ruling out moving back into the midfield though ».

How do you see your polyvalence?
« It’s positive. In the midfield, the competition is a lot stiffer. In the centre of defence, whichever side, there is less… Afterwards, when all the defenders are available, I don’t know what will happen. In terms of hierarchy, I’m in fourth place. But I don’t know what the coach thinks. It’s up to me to force my way into the side ».

The style of play and instructions, are they different with Claude Puel?
« Everyone defends with a lot of closing down high up the pitch, which means for the moment that we haven’t been in much danger at the back. We just have to sweep up the crumbs. To play like this we need good organization and team spirit. Everyone has understood what needs to be done. The roles are much better defined this season. It all starts with the forwards and afterwards everyone continues the pressing. It’s a lot like how we played at Lille, even if the tactics are different. The coach likes us to do as we’re told and to stay in our zone of action. But, he won’t stop me going forward, for example, if the opportunity arises ».

The match against Lorient?
« I think we’ll be more exposed. They are a team that moves forward very quickly. It will be up to us to stamp our authority on the game ».

How are the injuries looking ?
« Fred has started training with the ball. He should be back with the main squad next week. Mensah was rested today. He won’t be playing with the CFA this week-end. Clerc and Santos are out. Cris and Réveillère are available. »

What do you think about Lorient ?
« They are difficult to play against and work well as a team; the team works hard to recuperate the ball; they close down the opposition well. They are a solid side with either a 4-4-2 or 4-4-1-1 formation. They are a very well disciplined side. They have a nice style of play and generally start off their seasons well. Last season with Lille we had a tough game against the mat the start of the season (0 - 0). We know what to expect ».

Where is your team at ?
« We’re progressing; we still have a lot of room for progression. All in all, I’m happy with how we are advancing in training. The group listens well, but the automatisms aren’t there in permanence during our games. The changes during games? Everyone has a specific role, without trying to take away any individual qualities. The goal is to cover the pitch either when we have or don’t have the ball. We can do a lot better in this domain. »

Where is your thinking about a new left back ?
« We’re moving forward. There are two profiles we are interested in, either a high profile player capable of playing in the Champions League, or a promising youngster who we will be able to make progress. Anything between the two doesn’t interest me » ;
Facebook
Tweet
Forum