All about FC Lorient 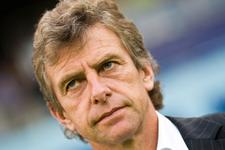 Lorient started off their season well, winning 1-0 away to Le Mans...Their squad has not changed a great deal during the summer transfer market...
Gourcuff’s men finished the 2007-2008 season in 10th place with 52 points, the second worst attack (32 goals scored, with 14 from Saïfi, 7 from Vahirua…) and the 5th best defence (35 goals conceded). The summer market has not seen any great changes at Lorient : Amalfitano, Gameiro, Le Lan… have arrived ; Hautcoeur has gone back to St-Etienne, Bouhrani left for Vannes… Vahirua is still recovering from his operation on the achilles tendon. Stability is the order of the day at Lorient.

In their first match of the League campaign, Audard and his teammatesbeat Le Mans 1-0 thanks to a penalty from Jallet. 1 goal from 12 shots. Le Mans had 53% of the possession and shot on goal 10 times. 2 yellow cards for the Bretons : Namouchi and Jouffre. 13 players were used with Amalfitano and Robert coming on for Le Pen and Namouchi.