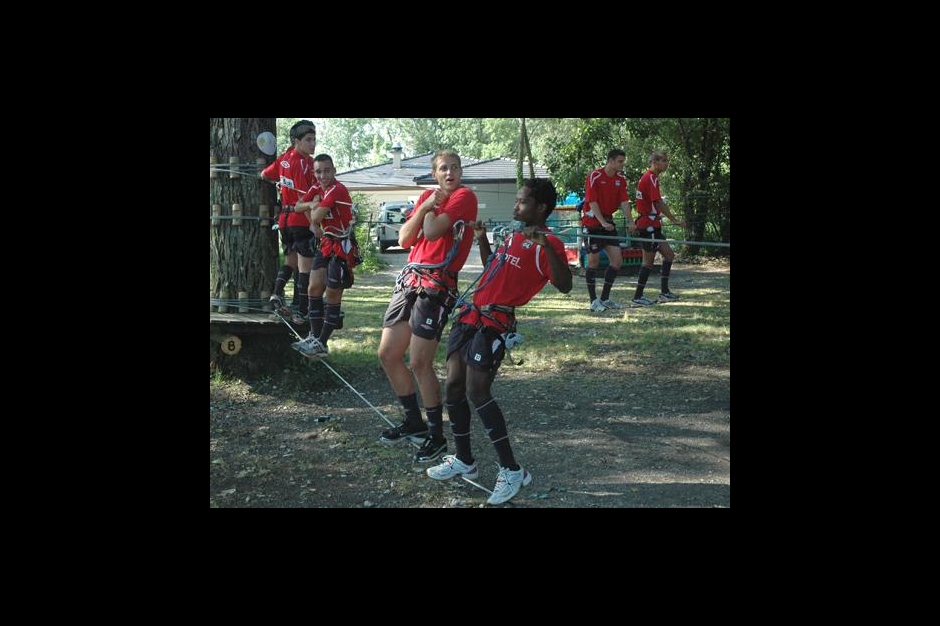 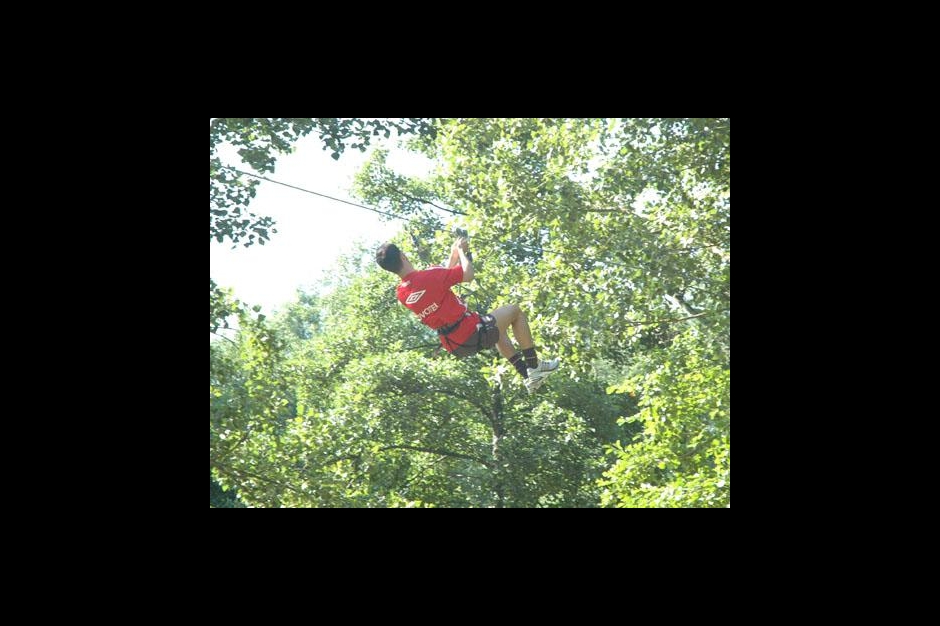 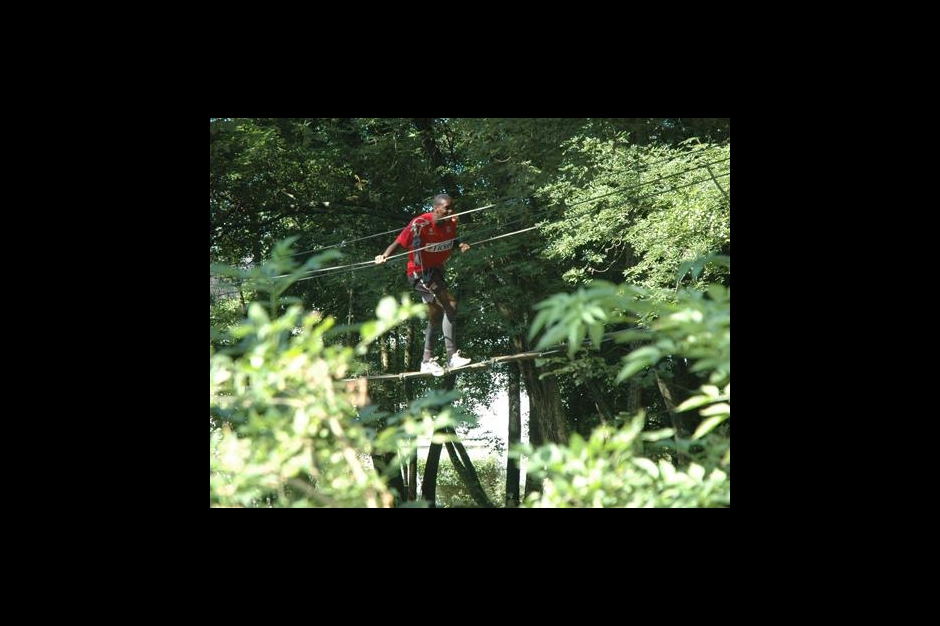 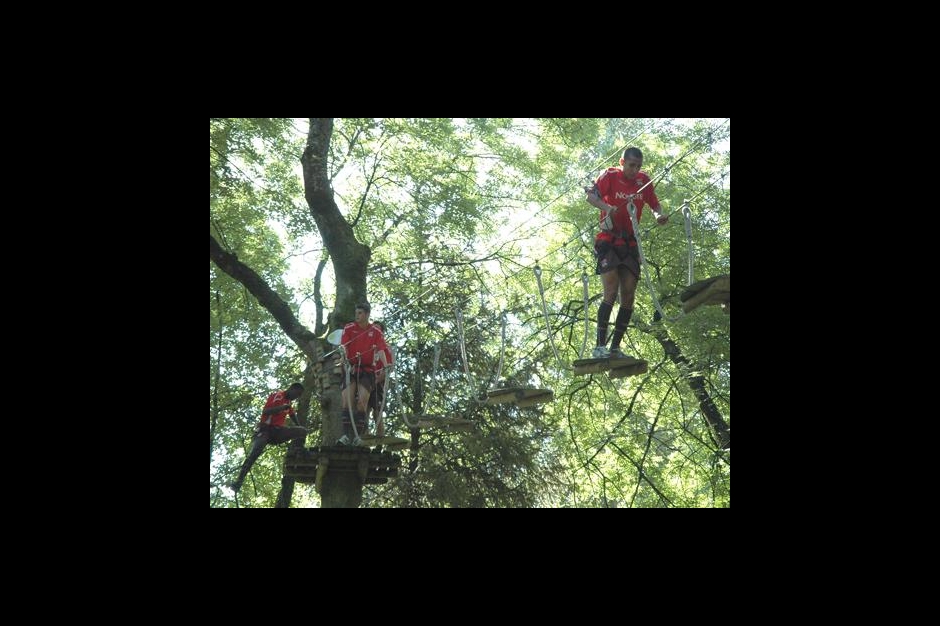 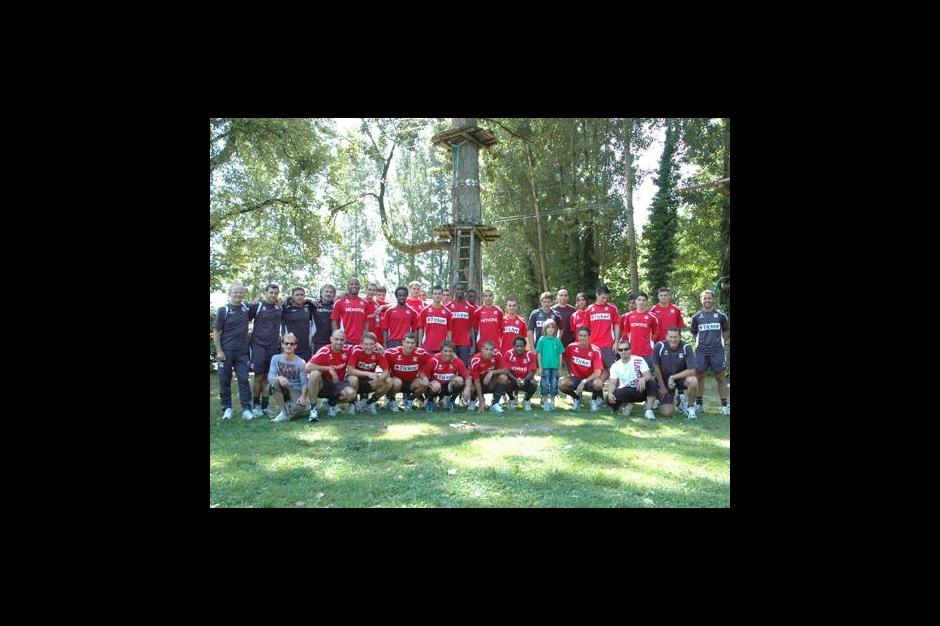 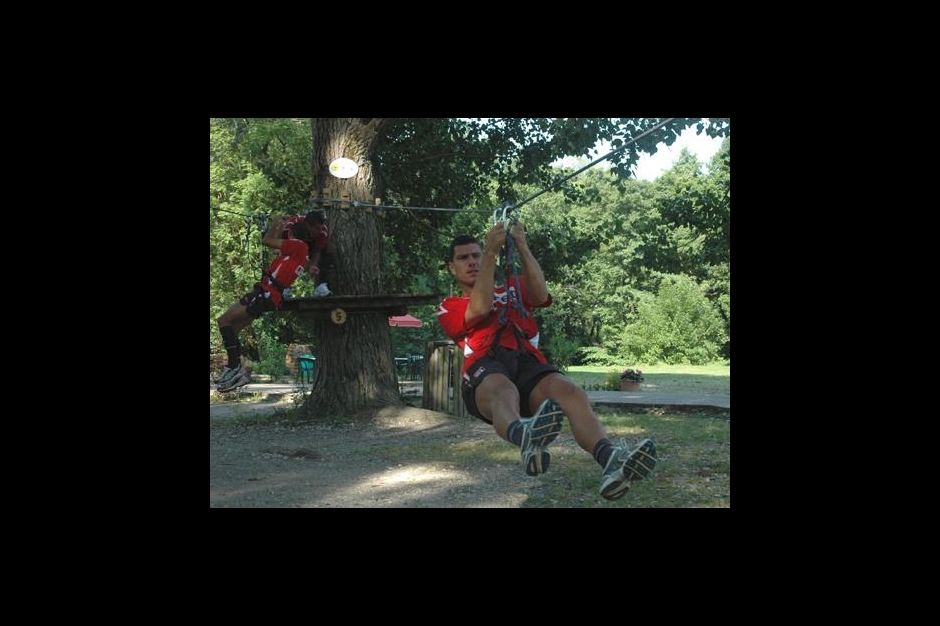 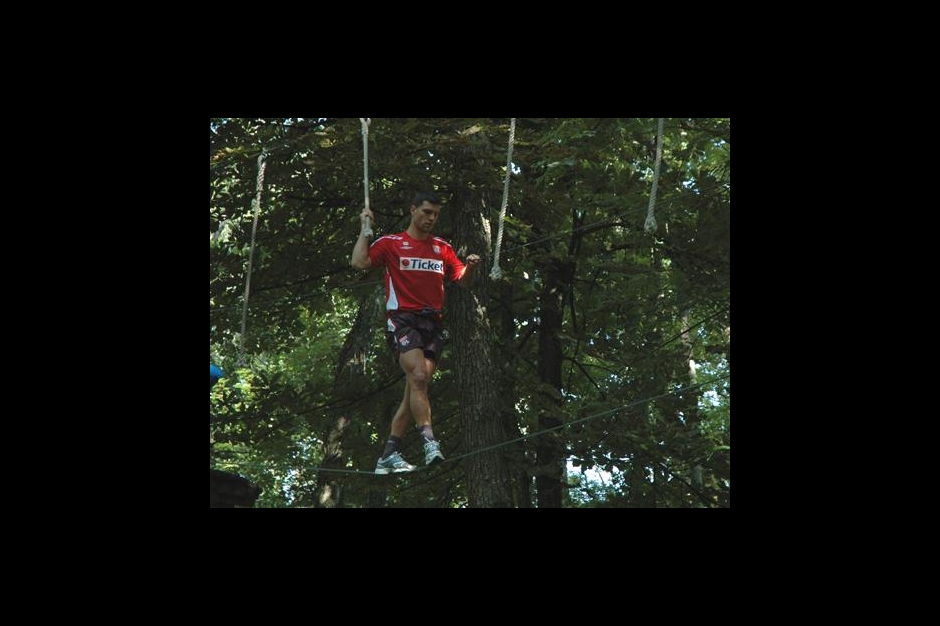 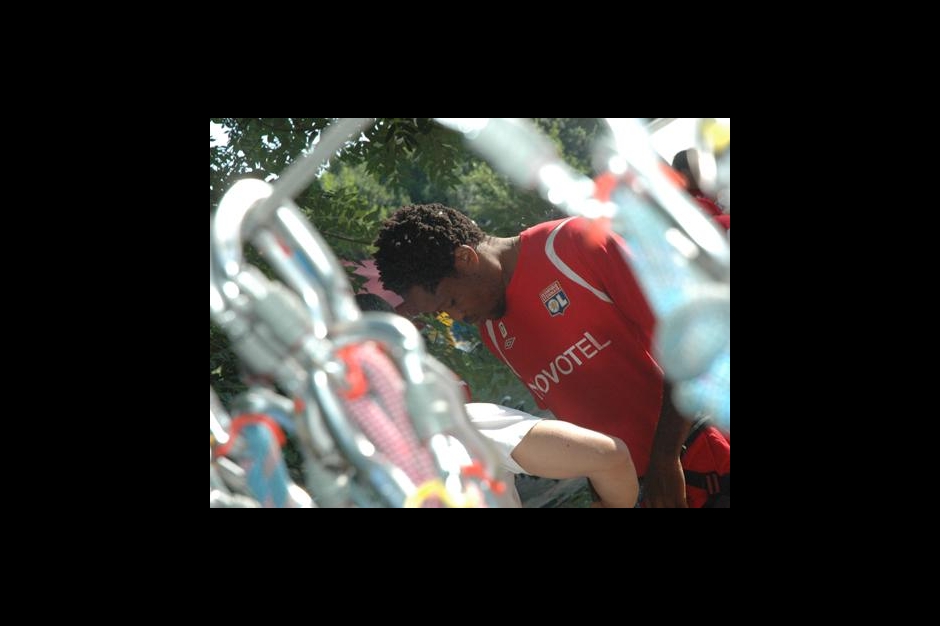 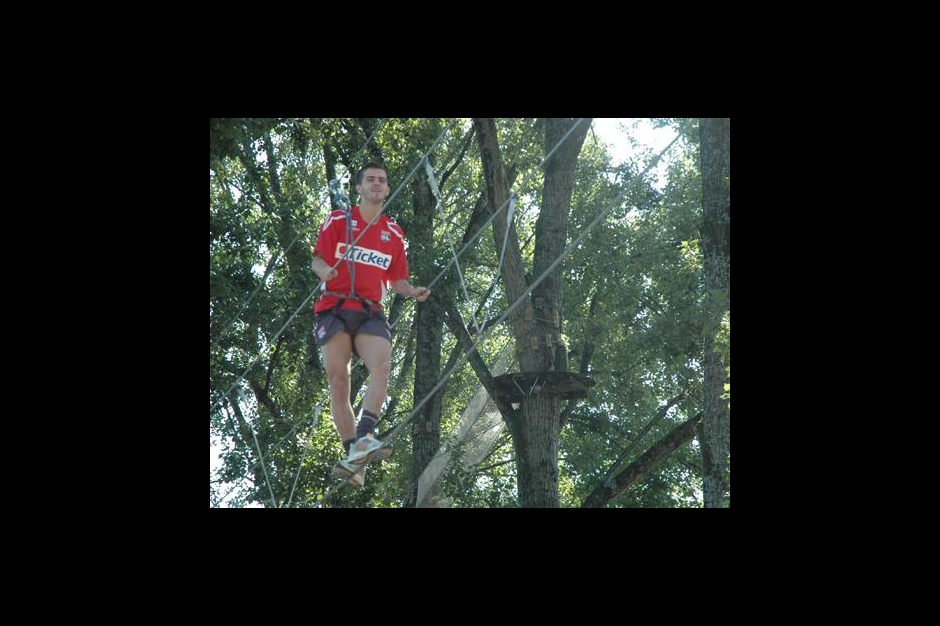 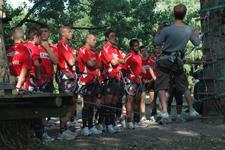 A sporting but fun morning… The OL squad reached new heights when they visited a forest fitted out with different obstacle courses in the trees…
A few minutes of explanations on how the equipment works and the rules to respect … a trial run for the majority of the group before hitting the heights. The six times French champions climbed the heights on Thursday morning at Forestland in Divonne.

3 runs at different heights (4m, 10m & 15m) and different lengths. The show can begin, in the wake of Jean-Alain Boumsong who went ahead as a scout at 10 metres off the ground. « You can’t have vertigo if you do this … Doc, did you bring all your gear in case there is a fall … It’s hard, I wasn’t born in a tree … oh, oh… it’s getting more difficult … calm, calm… ». The central defender thinks things out before he advances, almost scientifically. Once he’s finished the 10m run, he heads for the 15m. « Great, it’s even higher … ». Just like him, Govou, Clerc, Pjanic, Hartock show the same enthousiasm.

Shouts of joy and maybe a little bit of fear during a 15om descent at a speed of 40 km/h… There are other tensions, when the cable sways with the wind or when moved by one of the guys! « It’s not really my thing … ». Sid Govou murmured this phrase a number of times, but he managed to finish the 10 & 15m runs in style. « It’s really physical … ». Rémy Vercoutre came to the same conclusion, once he got his feet back on the ground : « it’s not relaxing … ». Gifted for this type of exercise, Jo Hartock had great fun on the two runs. Some passages take a certain amount of time for certain guys who eventually get over their difficulty.

The Brazilians Juninho and Cris headed of last on the 10m run and laugh in anticipation. « Juni » is surefooted. « I worked in a circus before … ». So, just to make things difficult, Cris decides, whilst waiting for his turn, to move the cable … Kids having fun.

[IMG43345#R]The staff are not inactive either . All split up they visit the installations. « When I was a kid I used to climb trees all the time … ». Joël Bats will suffer, even admitting after going over an obstacle: « I’m terrified … ». The guys in blue have fun made of them as well. The coach received a few remarks... "for once you’re not first..." and he doesn’t let others get away with anything either..."You didn’t stop breaking ".

« Look at the little fat guy … he doesn’t look very good on that thing … ». Monsieur « Jo », sitting calmly in the shade dreaming of a barbecue analyses the style of his companions. He them turns very profound. « The guys in red are in the woods looking for chlorophylle so that the world doesn’t disappear … hey, there’s a start for a film … ». No worries about the mosquitoes though … there are plenty of them and they are very much alive!

At 11h00, satisfied by the interlude, everyone cleared away their equipment. Govou & Hartock spent a little time on a trampoline. Just the time for a photo souvenir and the bus takes the squad back to the hotel. At 17h00, the playing field is still green but there are no surprises this time …
Facebook
Tweet
Forum