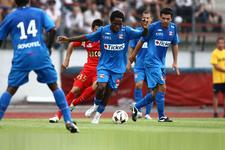 On Saturday,against Bordeaux in the Champions Trophy, the curtain will rise on a new season. In their final preparation game, OL lost out, in Annecy, to Monaco (0-1), a team that they defeated twice last season.
The level of play and the work put in by the team do not incite pessimism. If OL messed up the final stage of their preparation, they didn’t mes s up the match. Visibly limited by their intensive preparations, OL were just missing the energy to make the difference in the last third of the pitch.

Claude Puel had a united group for the first time, with the interantional players and those who were present at Tignes all together, this final friendly game had some importance: the 4 – 3 – 3 « à la lyonnaise » that was put out will most likely be the one that starts the game against Bordeaux on Saturday, with injuries to Fred, Keita, Mensah, Santos and Ederson making any surprises unlikely. The first indications of the summer: Mathieu Bodmer seems to be flavour of the month … in the centre of defence alongside Cris. A defensive pairing that needed a few minutes to find their feet at the start of the game. Too much time! After a cross which Bodmer cleared (2nd), Licata, all alone in the box, opened the scoring (3rd).

The rest of the game was to the advantage of the reigning champions, Monaco not getting back into OL’s box until Leko fired an effort wide in the 86th minute. Thanks to their closing down all over the pitch, OL blocked all the rare incursions from Ricardo’s men. But OL did not have any success in front of goal, Sidney Govou, hitting the post with a header (5th). César Delgado not hitting his effort well enough (11th) and Makoun not placing his headed effort out of the reach of Flavio Roma (22nd).

The work put in since the start of the week will pay off soon, maybe even more so next spring but, for the time being the heavy legs are being penalised in their duels. It also allows the squad to work on different « plays ». It is from the sessions on the pitches at Divonne-les-Bains that Juninho found the inspiration to play in Karim Benzema from a freekick just 20 metres out; the French international did not manage to hit the target though (36th). The Brazilian went back to basics but Ruffier managed to push away his freekick (49th) then did the same from a Karim Benzema effort (52nd). OL would have surely managed to get back level if the Monaco keepere hadn’t been in inspired form. He then went on to punch away a powerful header from Makoun (75th) then saw efforts from Boumsong and Pied miss (70th & 88th).

Just three days before the defence of a trophy they have held for the last 6 seasons, OL’s second friendly defeat could not have come at a worse moment. However, with 3 victories and 2 defeats the outcome is still positive. The time for experimenting is over. It’s now competition time!
Videos
Facebook
Tweet
Forum
Videos