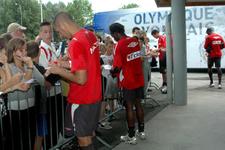 Just a light session today for the squad so they did not exert themselves too much...apart from Kim Källström…OL have a game tonight at 19h00 against AS Monaco...
Training started a little earlier today than it had on Monday because of thematch this evening in Annecy. At 9h 15, everyone started their own warm up before starting some passing work. split up into 3 groups composing Grosso, Källström, Baros, Delgado the French players Boumsong, Govou, Clerc and Toulalan. Controls were allowed before moving to one touch. This all went off in good humour with some technical gestures on a pitch that was nicely watered after the mornings rain.

[IMG43336#R]Afterwards they moved on to, set pieces with Juninho pulling the strings, playing in corners and freekicks. One of the Brazilians shots hit Govou.on the head « Sid » held his head for a few moments, setting his partners off laughing. But he didn’t need an aspirin for his headache although it was suggested by the facetious Abdel Redissi.

Kim Källström left the main pitch in order to follow Robert Duverne. The Swede is continuing his trail back to fitness after his slight muscle problems of last week. As for John Mensah, who is resting at the moment, he stayed in the shade and watched how the session went, seeing it finish for Pjanic, Govou, Benzema and Mounier in front of a goal kept by Hartock and Vercoutre. Volleys were fired in , with the crosses played over by Patrick Collot and Jöel Bats.

At 10h 15 everyone, apart from Källström, was on the bus. The traditional pre-match preparation was about to commence. This is the final pre-season friendly before the Champions Trophy in Bordeaux, on Saturday. Bordeaux, a team and a goalkeeper Ramé, against whom the captain Juninho has not scored a single goal in 7 seasons. « Yes, I know. But even if I would like to score against them in an official game, the only thing that count sis the victory. I’m feeling good; pre-season has gone well … we’ll see ». What about the Champions Trophy? « I think we have it anyway, having won the League and the Cup. But against last year’s runners-up it will be a big game. I don’t think there is an obligation to win, even if this game starts the season …». Do you have any memories of this competition ? « Just the joy shared with my teammates when we’ve won it … It’s at that moment that you realise you have done something ». The native of Récife has still not scored in a Champions Trophy game. If he did on Saturday it would be a great premiere!