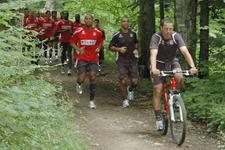 The Ol group arrived in Divonne at the end of the morning...After lunch and a siesta, they headed out into a nearby forest for a physical session after two days of rest...
It took two uneventful hours to reach Divonne, famous for its spas, casino, racetrack…and lake, which is nothing like Lake Léman which is just a few kilometres away. Switzerland is nearby, notably the city of Nyon, and the headquarters of UEFA.

The squad headed straight for the hotel, lunch and then a siesta. At around 16h00, everyone came downstairs for a snack and to pick up their kit. François Clerc is from the region: « It’s true we’re not far from my home town … ». Seeing John Mensah, the newest OL recruit, walk past, you notice the size of the guy! His nickname the Rock fits him like a glove, even when he isn’t on the field.

At 1700, rendezvous at the bus. First of all signing autographs for the gathered supporters … Juninho and the rest of the squad headed a few kilometres out of town to the Divonne forest. The start of the training camp is physical. Robert Duverne explains the programme. « 2 groups will head off at a few minutes interval. In total there will be around 50 minutes of effort. Watch out for roots and stones … ». Robert Duverne and Patrick Collot lead the way on mountain bikes.

50 minutes later, the first players arrive at the bus. When everyone has arrived, the séance is finished off with some stretching. « It’s good to start off with running after two days rest … ». Jean-Alain Boumsong appears to have appreciated the session. « This type of camp is very important at the start of a season. It allows us to get together, to get to know one another better. The fact that we didn’t take part in the camp at Tignes? I don’t think it’s a handicap. The international players finished their season after everyone else. No, everything is fine … ». The new season starts in just over a week. What does the Champions Trophy mean to the former Auxerre player ? « It’s another competition to win. At OL, we always play to win. And anyway, this trophy is very important for the club. I played once in the competition for Auxerre against OL and we lost the game (2 - 1 at Gerland in 2003)… »

On Monday, the six times champions will have a double ration of training. In the morning and the afternoon … time for football. On Tuesday at 19h00, OL will face Monaco, who are training in Contrexéville, at the stadium in Annecy. OL are going into the final stretch of their pre-season preparation