The group of 26 for Divonne-les-Bains 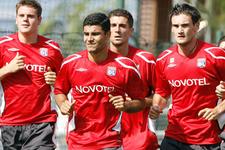 Claude Puel has called up 26 players for the training camp which will take place in Divonne-les-Bains from the 27th of July to the 1st of August.
John Mensah and Kim Källtröm, who have not trained with the rest of the squad this week will be going. On the other hand, Fred (knee) and Kader Keita (arm), who are recovering will stay in Lyon.
Fabio Santos, who has a broken jaw will be operated on on Thursday.
Valdivia, Grenier, Beynié, Fontaine and Paillot were not called up by the coach.