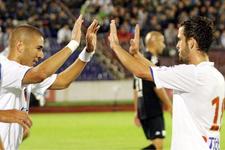 Two out of two! After yesterdays success in Belgrade (3-1) by the team made up mostly of the international players, the rest of the OL squad signed a second victory in two days against Nancy (3-0). Juninho, Pied et Tafer scoring the goals.
Of course the game against Nancy held less charm and prestige than the game against Partizan, and not only because of the size of the stadium in Villefranche-sur-Saône quite different to the home of Partizan Belgrade. Those who had played in Belgrade took their places in the stands, which made for a nice VIP section!

In pre-season, results are less important than the dynamic which is being built up. It was up to Juninho, Bodmer et al not to break the momentum kicked off yesterday by the international players. Mission accomplished: in two days, Claude Puel managed to give playing time to all the valid members of the squad (except Joan Hartock); with two wins in two games, 6 goals scored and only 1 conceded, the outcome is positive. The only blotch on the copybook: Fabio Santos could be out for a number of weeks. Injured in clash with Zerka, it would appear that he has a broken cheekbon.

The squad can be satisfied with the, first «clean sheet» of the season. Nancy did, however, come close to opening the scoring in the first half. Zerka, with a shot that went just too high, was the first to worry Rémy Vercoutre (16th). Things got a little closer when Sami, with a header, hit the post (19th). OL’s keeper closed his legs just in time to stop an effort from Pinto (22nd) and flung himself full stretch to save a freekick from Bérenguer (42nd). OL were much more compact and concentrated in the second half, not allowing Nancy any shots on goal.

As is often the case, the difference was made from a Juninho freekick : 20 metres out from goal, the Brazilian fired the ball into the top right corner of Grégorini’s goal (7th). At half time, without flattering them, OL’s one goal lead rewarded the more realistic side. With the heat exhausting, Baros was the first to force Grégorini into a save (3rd). Mounier then came up short against the keeper (17th). A cross from Ederson flew across the front of goal without anyone able to tapi t home (20th). Efforts from Baros and Pied didn’t have much more success (38th & 39th).

« Juni » laughing and Fabio Santos grimacing. If the captains effort brought light to an approximative Lyon performance in the first half, the injury suffered by Fabio Santos darkened the evenings proceedings. The midfielder, who was making his return to action after suffering from a twisted ankle, left the field in obvious pain. A tough break for OL just two weeks before the start of the season.

We had to wait for the last twenty minutes of the game before seeing OL accelerate the rhythm and find the back of the net on two occasions. After an effort from Juninho went just over (56th), Jérémy Pied took advantage of Milan Baros breaking through the centre of the defence in order to double their lead (69th). When he looks back at the pre-season preparations Claude Puel will probably take a close look at the stats of Yannis Tafer. Played in perfectly by Clément Grenier, the young forward once again showed his proficiency in front of goal by sliding the ball just underneath Grégorini (78th). In four games, he has already scored 3 goals!
Videos
Facebook
Tweet
Forum
Videos