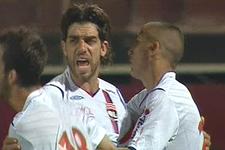 OL are continuing their pre-season preparation. Despite the Tafer's goal in the second half, OL went down 2-1 against Rapid Bucharest. Claude Puel and his men's next rendez-vous is on Wednesday July 23rd in Belgrade (live on OL TV).
Playing with a team made up mostly of youngsters from the academy, OL, against a side that is further on in their pre-season preparation, did not play too well in the first half, showing defensive naivety and committing a lot of errors. Despite their refusal to give up and an encouraging second half , Claude Puel’s men could not make up the two goals that they had conceded before the break.

More realistic and stronger than Nîmes, the team from Bucharest showed the limits of the OL side at the moment. Before the Champions Trophy, at the Stade Chaban-Delmas against Bordeaux, OL will play three other friendly games, against Partizan Belgrade, Nancy and Monaco. In two weeks time, in Bordeaux, the French champions will be a lot stronger physically and will have picked up the automatisms within the squad. The international players will be operational. In other words, it will be a very different OL. But before getting there, they have to accept being dominated by the third place team of the last Romanian championship and get quickly back to work.

On Thursday, Claude Puel spoke of his expectations for the game: reproduce during the match the different sequences worked on in training. In the first half, the OL coach must have been disappointed by the lack of attention shown by his defenders who left Hugo Lloris alone against the Rapid Bucharest forwards on two occasions. Played in behind the young central defenders, Boya took advantage, firing past Lloris (1 – 0, 6th). The Lyon keeper then pulled off a great save from Spadacio who had gotten through the OL backline (20th). Lazar had fired over the bar not long before that (10th). Just before half time, from a cross coming in from the left, Boya, alone in the centre of the penalty area, placed his headed effort out of Lloris’s reach (2 – 0, 44th).

Offensively, there was not much difference. Before half time, they had hardly shown anything. Juninho fired into the stands of the Stade Giulesty (4th) then straight into the keeper Andrade’s hands (8th). After an effort that was not strong enough (21st), Anthony Mounier, very active on the left flank , centered for the Brazilian whose left footed shot crashed into the post (37th).

As was the case against Nîmes, OL’s second half, after a lot of changes, was much better . Not allowing their hosts too many opportunities, OL put in a solid and encouraging second half display. After Mounier’s shot was pushed away in the centre of the box by Andrade, Tafer, who had come on at half time, reduced the score, putting away his second goal in two games (2 - 1, 57th). It wasn’t enough to avoid defeat, especially as an effort from Ederson missed the target (58th) and Andrade pushed away another effort from Tafer (84th).

Without the time to turn around: OL will be back in Lyon during the night. Pre-season preparation is in full swing and Bucharest was just part of it .
Videos
Facebook
Tweet
Forum
Videos