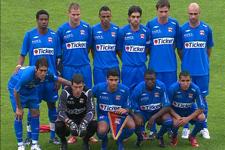 After falling behind, OL came back into the game twice in the first half through Juninho (10th) and Yanis Tafer (40th). Anthony Mounier gave OL the victory in the second half after a brilliant individual effort (63rd).
After ten days of intensive work in Tignes, Claude Puel’s men had a rendez-vous in Albertville for their first friendly match of the season. With the international players only coming back next Tuesday, Hugo Lloris, Anthony Réveillère, Fred and Fabio Santos all out with injury, it was with a diminished squad that Olympique Lyonnais faced up to Nîmes.

Claude Puel decided to put out the following formation in the first half of the game : Vercoutre, Gassama, Paillot, Cris, Fontaine, Bodmer, Ederson, Juninho, Keita, Delgado, Tafer. Under some light rain, the game started without much rhythm. The young Yanis Tafer was the first to show himself with a shot from about 20 metres out (6th) but his effort did not trouble the former OL keeper Nicolas Puydebois. The Nîmes side, with a great desire to give OL a run for their money, was the first to get things going. From a freekick from 20 metres out, Ech Chergui, put the ball into Rémy Vercoutre’s net (10th). 1 - 0 for Nîmes! From the restart, Chelito Delgado went straight down the left wing and his cross which was knocked on by a defender dropped into the 6 yard box where Juninho easily fired in a volley (11th). Equaliser from the OL captain! Not long after, the centre back Sandy Paillot saw his powerful header saved by Puydebois after a corner from Kader Keita (15th). While OL gave the impression to be taking control of the game, the Nîmes side who were giving their all, surprised Mathieu Bodmer and his teammates. A shot by Kébé which was defelected by Cris left Rémy Vercoutre stranded and unable to do anything about it.

OL tried to go down the flanks often through Delgado and Keita but the final pass was always lacking. The Brazilian Edersonthen showed what he could do with a lovely half volley, but his effort went just wide of the goal. A few minutes later, OL’s centre forward Yanis Tafer broke through the middle, resisting his defender, and fired home past the Nîmes keeper from 8 metres out!!! A superb goal from the youn Yanis Tafer who already seems to be following in the footsteps of a certain Karim Benzema... Despite a great chance for Colloredo, two minutes before half time, the two teams went in at the break level at 2 - 2.[IMG43319#R]

The OL side was completely changed for the second half with only the right back Lamine Gassama keeping his place. The eleven OL players for the second half were: Hartock, Gassama, Faure, Seguin, Valdivia, Mehama, Beynié, Pjanic, Pied, Grenier, Mounier. With this new look side, the physiognomy of the match changed. Right from the kick-off, OL’s youngsters were closing down their opponents quite high up the field, but were more disorganised than their predecessors. Miralem Pjanic tried to orchestrate the game play, but the lack of automatisms with his new teammates did not help his efficiency (55th & 57th). A recent arrival at Nîmes, the former L1 player, Elie Kroupi hit Hartock’s crossbar from a magnificent free kick (62nd). From the counter attack, Anthony Mounier otherwise known as "Moun" went around the Nîmes defence and hit a left foot shot between the legs of the goalkeeper, giving OL the advantage (63rd). A magnificent goal! Clément Grenier, up front for Lyon, went close to giving OL the knockout after a perfect pass from Pjanic (69th). The two men then combined again, this time Grenier playing the ball in for a Pjanic header that the keeper saved well (76th). Pjanic, again, then dropped a corner onto the head of Seguin, the young centre back, but his headed effort went just past the goal. The last chance of the game fell to Anthony Mounier who, on his weaker foot, messed up his effort (86th). OL finished their first game of the season with a victory. More than the score line, the good performance of OL’s youngsters is what will be remembered of the game.

[IMG43318#L]At the end of the game, the General Manager, Claude Puel spoke to OLTV : « It’s good to win games whether they be in training or friendly matches. I think we put in an interesting second half, with the team closing down their opponents; there was a lot of quality and generosity. Yes, I think it was a good second half performance. The youngsters had the opportunity to show what they can do, that is why we brought them with us to Tignes we’ll be talking about it all with them individually. It gave me a chance to have a look at them and for them to build up some confidence, we’ll see how the pro group evolves, but there are a number of youngsters knocking on the door and it’s important to give them their chance. »
Facebook
Tweet
Forum