One last training session at Tignes 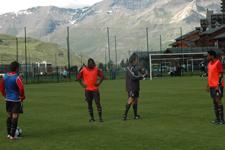 After the press conference, the OL squad went through one last training session on the pitch at Tignes...Next up, the first friendly game of pre-season, on Saturday in Albertville...
Without Cris, Fred, Fabio Santos and Réveillère, under the watchful eye of Bernard Lacombe who had come up for the day, OL started the session of with the traditional warm-up with Robert Duverne. They then continued in two groups.

To finish off the session, a match was played on a small pitch with two goalkeepers (Vercoutre and Hartock). Ederson scored the only goal of the game with a splendid shot. The majority of the squad started stretching while Ederson, Pjanic, Juninho and Mounier worked on their freekicks. Hartock, in goal, was called upon frequently and conceded a few of the efforts that were different in style depending on who was taking them. The crossbar also came to the keepers aid a few times.

At 18h 30, the training camp at Tignes was over. The numerous spectators were demanding a last autograph, one last photo. "Juni" was particulary in demand. 10 days at altitude; the 11th training camp... one more night at the Montana before heading back down to the plains in order to play this first friendly game of the new season. Claude Puel was happy with the training camp, as he said at the press conference. A training camp that, seen from the outside, looked to be interesting at all levels. When conscientiousness, humour and availability all come together, everything is great . It has given us soime great images for the rest of the season already.
Facebook
Tweet
Forum