In the wake if the coach 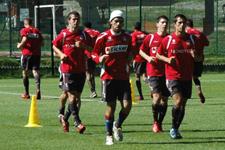 Almost two hours were spent on the pitch of the Eric Cantona Stadium, shared between physical work (specific work for the keepers) and gameplay...Quality, intensity...in the wake of the coach who was showing the example...
The mountain is beautiful under the sun. It’s also very busy during the summer, just the time to get ready for the winter season. The endless trucks climbing the steep roads in no way upset the concentration of the OL squad. 50 busy minutes that started with a warm up and then some intensive phsyical work for the outfield players, all of this controlled by Robert Duverne. Cris, Fabio Santos, Fred and Réveillère were absent. The three keepers did some more specific work with Joël Bats.

50 minutes later, and no time to stop and take a breath , the players were working with the ball on a small pitch, without Juninho who was jogging and Lloris who was working on his footwork with Bats, playing a 5 a side game and then a 6 a side game with players outside the limitations of the pitch who could take part in the game within their zones but not control the ball. Rhythm, speed, commitment, desire, goals and lovely play. 45 minutes of play that saw the players rotate and the pitch change dimensions.

After the physical work, Claude Puel put on a bib. He played in one of the teams with five players (goalkeeper included). Agressive, a winner, demanding, intelligent, the former Lille coach as always was an example to all . A tackle, a run, a pass, positional play, a shot … He was a real motor for the squad. [IMG43315#R] He pulls his side to the win … by playing. The age gap is inexistent. He has the soul of a real leader . We can still see the player that he was, the one who always hated losing, who did not know the words “give up”. He guides, encourages, corrects, even argues with the referee. He explodes with joy when a goal is scored, moans in certain situations, is mad at himself for any error. No question of whining after slight knocks. « You’ll have plenty more … ». Of course it goes without saying that his side won.

Some stretching to finish of the mornings work, a session that was a joy to behold from the sidelines. This squad should have real warrior like qualities this season …
Facebook
Tweet
Forum