Principles and an injury 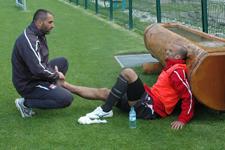 A training seesion with the football in the cold and wind...an educational session on certain principles of play...Unfortunately the session was overshadowed by the injury to Fabio Santos's ankle...
At 17h00, the OL squad headed down onto the pitches. Without Anthony Réveillère who worked on the bike and did some exercises inside. «Antho » had a scan, after the mornings training session, on his calf which has been giving him trouble since Sunday morning. There is nothing to worry about though.

The players warmed up with the ball before Claude Puel took control of a session based on certain principles of play like offensive and defensive closing down...OL’s coach went back over every stage to correct any errors and give players other solutions … The keepers took turns in goal with Joël Bats.

After a long « educational » period, came two 8 minute games. Unfortunately at 18h 30 after a mid air collision with his partner Lamine Gassama, Fabio Santos injured his ankle on landing. Lamine had blocked his ankle, which then turned. The Brazilian, in evident pain, was taken away immediately to have an x-ray after the medical staff had done what was first necessary. « We’ll see how things are after the x-ray. It looks like a pretty bad sprain to his right ankle … ». The x-ray taken in Tignes confirmed the sprain without any other damage. Fabio will have an MRI scan on Wednesday. At the same time, Fred left the pitch suffering from tendinitis in his left knee.

So to finish the two 8 minute games, Sonny Anderson, who will take part in the France 98 match on Saturday, and Claude Puel came into the fray. To finish up, the squad went through the usual stretching session out on the field, despite the cold which made Rémy Vercoutre say: « we’re in Canada here ».
Facebook
Tweet
Forum