The Lyon players got back in touch with the ball 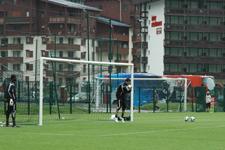 Still under the rain, the OL players got out onto the pitches at Val Claret just after 17h00. They showed a lot of good spirit during the different exercises and play...
The mornings work had been heavey, but that didn't show when the 25 players started touching the ball. They showed great hunger when they got hold of it. The 3 keepers were with Joël, of course. The x-ray passed by Hugo Lloris showed that his break is healing on schedule and is as it should be 2 months after the break. He'll have to be careful for another month; there is no question of trying to go quicker than the music even though he is not in anymore pain.

The 22 other players started off with a few different exercises with the ball. A good quality of pass and movement after controls were what Claude Puel was looking for. The rain and the wind didn't disturb the players at all. They then went on to an exercise with four goals; a game where the number of touches or passes allowed varied as the game went on. Kader Keita did not take part as his arm was reoperated on just one month ago. He must avoid any physical contact for another two weeks. He played a game of foot-tennis with the goalkeepers and Bruno Génésio.

At 18h 30, the session was finished and the spectators who were present were able to have their photos taken with certain players. A full day. On Friday, the program will be just as heavy with some biking slated in for just after wake-up, then some running and in the afternoon back to the pitches. [IMG43291#C]
Facebook
Tweet
Forum