Grosso and Italy are out of the Euro 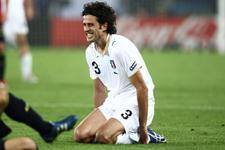 There are no more OL players in the Euro 2008. Yesterday, Spain put paid to Italy's and Fabio Grosso's, who played the entire match, dreams of becoming the second team (after France in 1998 & 2000) of doing the World Cup-European Championship Double.
At the end of the most boring of the quarter finals of the tournament, the Spaniards knocked out an Italian side who, deprived of Pirlo and Gattuso, both suspended, confirmed their poor performances of the first round. On their side, the Spanish were unable to develop their inspired gameplay which won them their first three games of the tournament.
Luis Aragones players were only saved by a brilliant performance from their keeper, Iker Casillas, during the penalty shootout; he pushed away efforts from De Rossi and Di Natale (Grosso scored his penalty ). They wil have to find a higher level on Thursday the 26th of June in the semi final if they want to get past a Russia side who are becoming more and more the favourites of the competition.

On Saturday they made people sit up and take notice when they beat Holland (3 - 1 aet). Suspended during the first two games (notably the 4-1 defeat to Spain), the Zenit Saint-Petersburg attacker, Andreï Archavine, has been outstanding and is fast becoming the symbol of the brilliant run of Guus Hiddinck’s men.
The last time a Russian side took part in the final of a major tournament was in 1988 (USSR lost to Holland 0 - 2), 20 years ago. Their last European player of the year title was Igor Belanov in 1986. After Zenit Saint-Petersburg’s win in the UEFA Cup, a participation in the final of the Euro 2008 next week would, undoubtedly, make Archavine a strong candidate to succeed him.

In the other semi final, Germany will play against Turkey. The two teams who both finished second in their respective groups, made it to the last four with victories over Portugal (3 – 2) and Croatia (1 – 1, 3 – 1 on penalties).