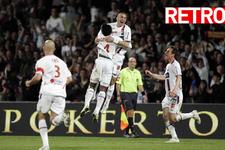 The final effort will be a lot longer than expected!
The 15th of the month comes around and it is time for the players to have a little break from their difficult combat for the seventh title. It’s time for a change of scenery. It’s time for the Coupe de France, and the quarter finals against Metz, the League’s bottom team. The « serial goalscorer», Karim Benzema, didn’t hesitate to shoot. Beating Metz by the smallest of margins (1 - 0), OL have gone more than just one round further : they have reached the last four in the Coupe de France for the first time since 98. A « little » event in Lyon, a rare performance.

However, the demons have not disappeared all of a sudden. The pressure is building on the champions who have a small four point lead over Bordeaux.

During their trip to Strasbourg, OL almost slipped up again but managed to pull off a result, turning the situation around by scoring two goals in the second half through Bodmer and Grosso. Final score 1-2… Thankfully, as Bordeaux also took 3 points against Toulouse.
OL are advancing gingerly to and end of season which looks more and more disputed. Well aware of the dangers to the squad, the president decides to take things into his hands. The « chief of the clan » calls for « unity », speaks of « family » and « a winning mentality » in order to « make History ».
Thanks to two goals from Karim Benzema, two decisive saves from Grégory Coupet, and despite the sending off of Fabio Grosso in the corridor to the dressing rooms at half time, Lyon take another precious point against Caen. With a sigh of relief, they keep their four point lead over Bordeaux who could only draw with Nice (0-0).
There are three games to go … all decisive…
Whilst waiting for the run in, the players go off on a training camp to Evian. The women manage at the same time to qualify for the final of the Challenge de France, finding out at the same time that they will soon be playing at the Stade de France…
Facebook
Tweet
Forum