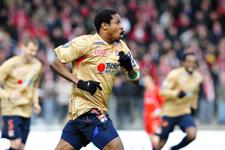 After 6 victories in as many games in France but an elimination from the last 16 in the Champions League, the month of March is a perfect example of OL's ambivalence: in France OL have no rivals, in Europe the level is still a little to high.
One week after the victory over Bordeaux, OL mark everyone’s spirits by beating Monaco at Louis II (3 – 0), an exploit they had not managed in seven seasons. Having already scored against Bordeaux, Kader Keita finishes the game off in one half scoring twice and allowing Fred to score the third. A large victory that should however be put into perspective: announced as one of the best squads in the Division, AS Monaco have spent the second half of the season in the lower half of the table and will only finish in 12th place.

Tuesday the 18th of March, in the last 16 of the Coupe de France, OL are up against Sochaux…for the fourth time of the season! Thanks to two goals from Karim Benzema, his 26th and 27th goals of the season, and after a rollercoaster stoppage time (Traoré equalising for Sochaux in the 89th minute before Benzema scored the winning goal 2 minutes later), OL knock out the holders (2 – 1) and continue their quest for a trophy that has eluded them for 35 years!!!

Just like OL, PSG are still on course for the Coupe de France. But, just before the 30th game of the season in the League, the club from the capital who, paradoxically, win the Coupe de la Ligue one week later against Lens (2 -1), are on the edge of a crisis. Their defeat at Gerland (2 – 4) push them further into anguish, putting them into 18th place in the League. Deprived quickly of Karim Benzema, taking a knock to the knee after half an hour, OL don’t give PSG any room for hope. Fred, with two goals, Govou and Juninho, also scoring, allow the six times French champions to build their lead over Bordeaux, who, after their defeat against Valenciennes (1 – 3), are now 9 points behind OL.

Down toi the luck of the calendar, the 30th of March, Alain Perrin’s men visit Nungesser, just one week after Laurent Blancs’ . Benzema absent, it is from the feet of Kader Keita that the spark will come. Goalscorer, then provider for Sidney Govou, the Ivory Coast international offers OL their sixth victory of the month of March (2 – 1)…
Facebook
Tweet
Forum