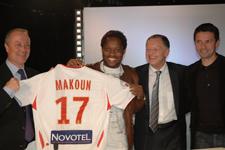 With the recruitment of Jean II Makoun - « one of Europe’s top defensive midfielders, a real star » as far as Jean-Michel Aulas is concerned, OL are showing their desire to be strong on both a national and European level . « He is one of the rare players that have both physical strength and technique, the qualities that we were lacking last season » notes OL’s president. His advisor, Bernard Lacombe, who aknowledged that they have been keeping an eye on the Cameroonian for a few years now, believes he has a profile similar to Jean Tigana, « with more power in front of goal », and underlines his « experience in the Champions League that will bring a lot to the club ». On his side, the former Lille player concedes that Lille’s non-participation in the european competition constituted a determining element in his arrival at Lyon and believes that he has « known everything with Lille » : « I want to step up a level, I needed a new challenge. It was the right time ».

As at Lille, Makoun will wear the number 17. A detail which is important as nobody had worn that number since the death of Marc-Vivien Foé, on the 26th of June. « In memory of Marco, for me and for all of Cameroon, it’s something emotional », recognised the player from Yaoundé. « The fact that Cameroon is once again alive at OL through Jean II is very strong and emotionally moving » declared Jean-Michel Aulas.
Facebook
Tweet
Forum