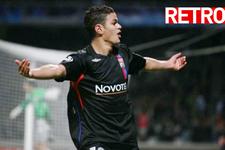 In November, everything moves quickly, very quickly in fact. After their outing in the Coupe de la Ligue, OL are back to the daily grind with the League.
The programme for the first half of November is as follows: V.A, Stuttgart and OM to be played at home in the space of a week. Lyon are racking up games at breakneck speed. The first two games bring victories, goals and hope … OL are firing on all cylinders but in the last game of their mini marathon, against Marseille, the locomotive « OL » is derailed.

On the 3rd of November 2007, Rémy Vercoutre is in superb form, stopping everything that Valenciennes threw at him, keeping a clean sheet and allowing OL to keep their 4 point advantage over Nancy, who had taken care of Bordeaux earlier on in the day. As for his opposite number Penneteau, he saw the ball hit the back of his net twice. Juninho, from an inch perfect cross by Karim Benzema, opened the scoring with a header. Penneteau conceded a second goal at the end of the game when Sidney Govou, who had come on as a substitute, beat two defenders and fired home.

4 days later. On the 7th more precisely, a Wednesday, Gerland is waiting for OL. The UEFA Cup is now an objective, unless … Hatem Ben Arfa… In a completely crazy game, the young left footer scores his first two goals in the Champions League against VfB Stuttgart including [IMG42685#R]a masterpiece of. Källström and Juninho reply to Gomez, who scored twice. Vercoutre, saves a penalty. The doors of the Champions League are still open, just …

Sunday the 11th of November, end of the week, end of the marathon...Armistice. The end of a run of 11 matches in the League without defeat. Never mind that Juninho had once again opened the scoring with a header. Niang equalises with a penalty before ending OL’s run just before the break. The end. Terminus. International break.
Lyon are still top of the League, Nancy are doing well but there is no cause for concern … and the SNCF are on strike.
Facebook
Tweet
Forum