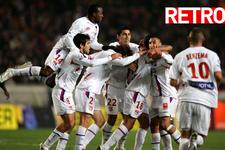 The international break is over, OL's players are back in service in the League, first of all with the reception of Monaco at Gerland.
Unbeaten in 7 matches (including 6 victories), the six times French champions overcome Ricardo’s players, winning the game 3 - 1. Juninho, Réveillère and Benzema score Lyon’s goals in a game that see’s a return to competition for the Brazilian Fred, absent from the playing fields for several months, because of a fracture to his 5th metatarsal.

The crucial moment in the Champions League is approaching with the double confrontation against Stuttgart. The 1st match is away at the Gottlieb-Daimler Stadion. After a fairly well balanced first half, Lyon manage to make the difference in the second half thanks to Fabio Santos and Karim Benzema. The race for the last 16 is thrown open again as at the same time Rangers and Barcelona neutralize each other (0-0).
The end of the month of October is a good time for OL. After their win over Monaco, it’s in Paris, at the Parc des Princes, that Lyon will impress everyone. Despite the sending off of Cléber Anderson (52nd minute), they win the game 3 - 2 with two goals scored by Hatem Ben Arfa. More than ever, Lyon are comfortable in their position at the top of the standings. Nancy, second, are now 4 points behind.

[IMG42644#R]A Lyon team that will also succeed when they enter the Coupe de la Ligue. Exempt from the first round, they face Caen in the last 16. Alain Perrin lets a number of senior players rest. It is the occasion for Kader Keita to show what he can do and score his 1st goal in an OL shirt. Mathieu Bodmer, reconverted as a central defender over the last few games and Karim Benzema finish of the work. Lyon win 3 - 1 and go through to the quarter finals of the competition. They will be up against Le Mans in the next round. The presence in the group, for the first time, of the young Mickaël Charvet should be noted.
Facebook
Tweet
Forum