Miralem Pjanic is a Lyon player 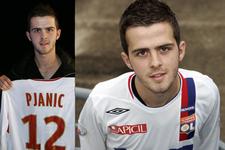 Jean-Michel Aulas and Rémi Garde presented Olympique Lyonnais newest recruit this Friday afternoon.
Jean-Michel Aulas
« Today is a good day. Miralem is a great hope for European football. He is also a player that has left a mark at his former club. He has a lot of potential and a strong personality. The competition to sign him was strong; we were notably up against some big German clubs. First of all we had to battle it out with Metz, so we could make the deal for him, then we had to agree terms with Miralem.
He has signed for 5 years, which gives him time to look to the future with Olympique Lyonnais. We’re preparing for the future and Pjanic is part of that. We’ve followed him all year. We had a deal so that we could follow him closely. Then we made our desire clear when FC Metz said he could leave.
We have some very good young players, it’s our plan to build for the future with the arrivals of Hugo Lloris, Ederson and Miralem Pjanic, you can also add César Delgado to the list as he hasn’t played much for us yet. They are technically strong players who have above average capacities. At the moment we are in discussions concerning other players, but no contacts have been made yet. It would be a little premature to talk about that today.
Concerning the departures, Loïc Rémy has opted for Nice. The contract is for 4 years and has cost 8 million euros plus incentives.
As far as the new coach is concerned, that is part of the things that have to remain confidential. We’ve made our presélection, but at the moment we are dealing with the outgoing coaches. For the moment nothing has been worked out. »

Rémi Garde
« We’ve kept an eye on Pjanic all season and we got some good information about him from his former coach Yvon Pouliquen. Now it is up to us to accompany, follow and to try and develop the huge potential that he already has. Things are moving quickly for this young man and in todays football you can have no certainties, but we have a lot of hope for him.
Miralem is a player who has no problems with the ball. He is way above average, capable of organising the play and to take control of the match. He sees the big picture and is at ease with both feet. He’ll learn a lot here, just by being with the great players we have in the squad. »

[IMG43220#R] Miralem Pjanic
« I’m happy to be here, it’s a club in my image: they want to win everything. I’d like to thank everybody who made it possible to be here today and be signing for Olympique Lyonnais. I can’t wait to get out onto the pitch at Gerland, to discover the training ground with the OL squad … the matches, the different competitions…
As far as my place on the pitch is concerned, I prefer to be just behind the striker or out on the left. But I can also adapt to other positions. »